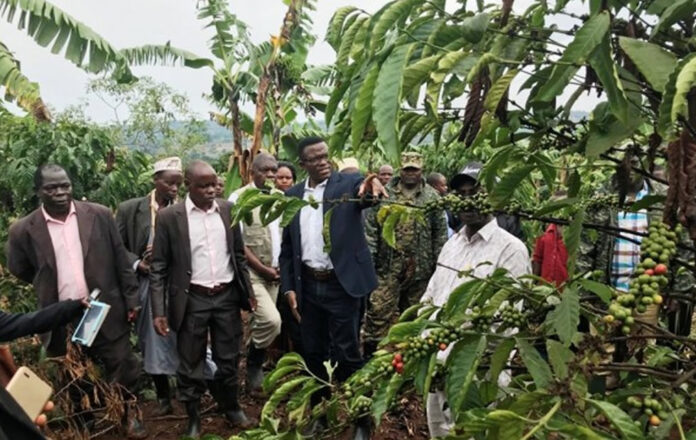 BUKOMANSIMBI:  As Bunyoro Kingdom is advancing their demands for a ‘concession’ on oil revenue, their Buganda counterparts are also considering asking government for a direct share on proceeds from coffee exports.

The Buganda premier Charles Peter Mayiga hinted on the consideration last week while addressing the kingdom subjects in Bukomansimbi district, where he monitored several exemplary coffee farmers, under his initiated campaign dubbed “Emwanyi Terimba’  that intends to popularize growing of the cash crop.

According to him, Uganda as a country has since its creation held Agriculture as its backbone, particularly with coffee as its main cash crop, which has largely been cultivated by communities within the boundaries of Buganda but the kingdom has never got any direct benefits from its sale.

“For years coffee has been the leading foreign exchange earner that has sustained the country’s economy for years but Buganda people as the main producers have never been considered for a direct benefit. While I support demands by Bunyoro on the Oil revenues, government should as well be mindful that we (Buganda) have also been cheated for decades. As they sought out Bunyoro, they should know that we are also on the doorway knocking for our share,” he noted, amid heavy clapping from his audience.

“Just like oil, coffee is also viable foreign exchange earner the only difference is in market prices,” he added.

According to Mr Herman Sseremba kasekende the Buganda agriculture minister noted that since the launch of the campaign, they have given out close to 7 million coffee seedlings to farmer in 9 counties of the kingdom.

“Out of these, a percent of 65 successfully grew and the rest never due to a number of factors including among others drought,” Mr Sseremba said.

He noted that in this year, they are targeting to give out 8 million seedlings only to committed farmers who will be spotted by the foundation.

On the contentious issue of land ownership and management, Katikiro Mayiga rallied the kingdom subjects to put all their lands to good use such that they can defend it from possible grabbing.

He challenged people to stop fantasizing a utopia life and get back to their gardens were there forefather’s got wealth from.

“Nowadays youth want to live a comfortable life just as they watch from movies. Real life and movie life are parallel for somebody who wants to get anything must work for it,” he said.