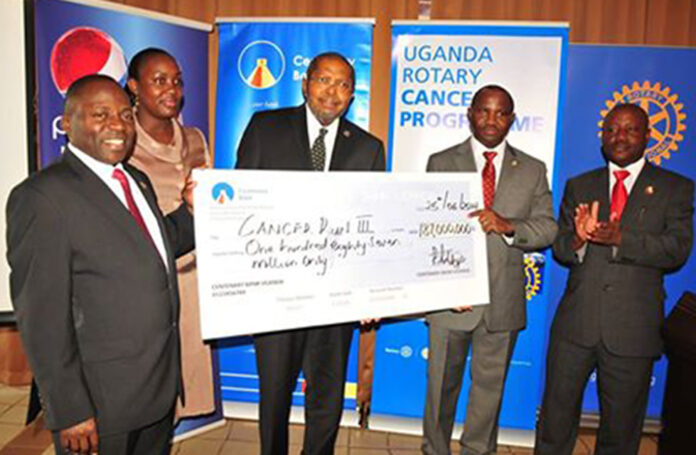 Centenary Bank and Crown Beverages Limited have allocated Shs267 million towards the third edition of the annual Rotary Cancer Run.
The launch was presided over by the Governor Bank of Uganda Prof. Emmanuel Tumusiime-Mutebile (middle) and Deputy Governor Dr. Louis Kasekende.

The funds will be used to complete the Rotary Centenary Bank Cancer Ward at St. Raphael of St Francis Hospital, Nsambya and Rotary activities. This ward is estimated to cost Shs1.3 billion and is currently in its final stages.

Speaking at the launch of the charity run at Sheraton Hotel in Kampala today, Mr Fabian Kasi, the Managing Director Centenary Bank said this cancer ward at Nsambya Hospital will help in the fight against Cancer.

“Centenary Bank has allocated an additional Shs187 million towards the construction of the Cancer Ward, and Rotary activities. Of this sum, Shs167 million will go to this year’s Run, Shs10 million to the cancer parades while Shs10 million was allocated to Rotary health days that were held earlier this year,” Mr Kasi said.

“The Ward will help to supplement the current limited facilities in the country, in prevention and treatment of cancers,” he added.

The launch was presided over by the Governor Bank of Uganda Prof. Emmanuel Tumusiime-Mutebile and Deputy Governor Dr. Louis Kasekende.

Meanwhile, the Crown Beverages Limited is contributing Shs100 million towards the Charity Run.

Mr Simon Lugoloobi, the Chief Executive Officer of Crown Beverages who was represented by Mr Jeff Ssekandi, the Customer Marketing Manager, said, “Pepsi is proud to be part of an initiative that will go a long way in ensuring that more Ugandans live a cancer-free life, while those who are already suffering from the illness get the best medical treatment locally.”

“As a key partner in the construction of the cancer ward at St. Raphael of St. Francis Hospital, Nsambya , Pepsi is contributing an additional Shs100 million that will be used for provision of running kits, refreshment for the participants in the Run, in addition to media and PR support for the event,” Mr Lugoloobi added.

In his remarks, the Chairman of the Uganda Rotary Cancer Programme, Mr. Stephen Mwanje thanks the Bank and Pepsi for the support.

“Cancer is one of the biggest health concerns in Uganda today and we are sure this ward will be a major milestone in the fight against it,” he said.

The run will be held on August 31, 2014 at Kololo Independence Grounds, Kampala. It estimated that over 3,897 women across Uganda have benefited from the cancer parades.