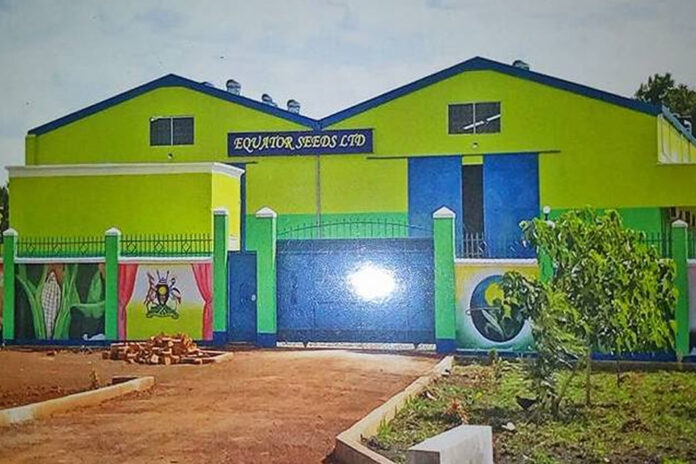 The company is dealing in a number seed production varieties in the country. It has partnered with several farmers’ groups in Northern Uganda and Midwestern region.

Some of the seeds they are dealing in include maize varieties of; hybrid and open pollinated types, Beans, Soya beans, Rice, Sorghum, Simsim, Groundnuts, pigeon peas among others.

Equator transfers seed technologies developed through public or private research into the hands of farmers.

Some of the Equator Seeds limited supported farms are in Masindi, Omoro district, Gulu, Kigumba and Minakulu.

The Equator Seeds Limited Managing Director Tonny Okello says they have partnered with at least 32740 small holder farmers mostly women and youths in different parts of the country. Majority of these groups are in Northern Uganda, and Eastern Uganda.

According to Okello, with majority of farmers in Northern Uganda affected by the 20 years of LRA war, their finances crashed affecting house hold incomes.

Okello who was meeting with Members of Parliament who went on a fact finding tour to evaluate the state of seed companies in the country.

The team was lead by Buvuma Constituency Member of Parliament, Robert Migadde who is also the Vice Chairperson of Parliamentary Committee on Agriculture, Animal Industry and Fisheries.

The MPs are currently conducting evaluation to monitor compliance of seed companies to set regulations.

Some of the maize seed plantations visited have a challenge of fall army worm which is devastating gardens.

Tonny Okello notes that fall army worm is one of the biggest challenges affecting them. He says to minimize this issue; they spend millions of money to buy pesticides which increases their costs of production.

Okello however notes that they have managed to fight these deadly pests.

MP Migadde noted that they have decided to evaluate seed companies to ensure compliance of the seeds which are given to ordinary farmers. He explained that last financial year, at least 800 billion shillings was given to National Agricultural Advisory Services –Naads and half of that money went to seed production.

Migadde explained that they want to ensure that seed companies give farmers genuine seeds. “We had complaints from farmers that some seeds are given to them late after the planting season has started. This has affected their germination rates. For example, last season, farmers in Teso sub region had issues with germination. We therefore want to find out when and how seeds are given to farmers and where are they coming from, what are the state of gardens were seed companies get them, MP Migadde noted.

Uganda’s representative to the East African Legislative Assembly (EALA) Mathias Kasamba, who was also the former chairperson Agriculture Committee of Parliament asked Equator Seed companies to create clusters of the farmers involved in this business.

He also asked them to introduce register to track all the seeds being distributed from the garden to the beneficiary.

The Commander of Operation Wealth Creation in charge of Northern Uganda Col. Ochoka Francis ongom noted that the seeds received from Equator Seeds Limited are of good quality and they have not had any germination concerns.