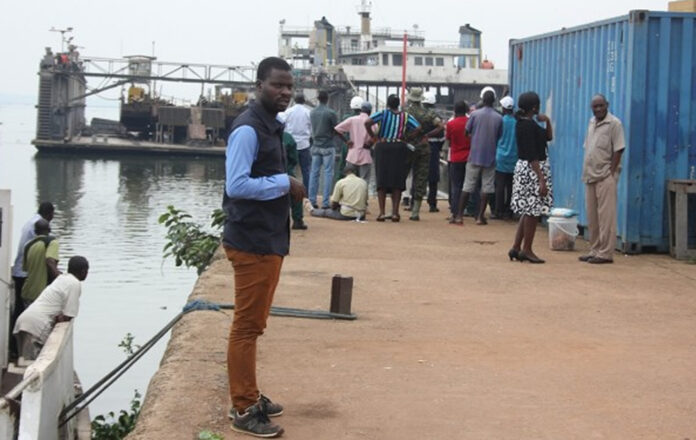 Business operators around Port bell-Luzira ships docking site located in the Kampala metropolitan area in Nakawa division are excited about the reawakening of a marine vessels repairing facility in the area.

The Luzira dry-docking facility which is used to conduct maintenance and servicing on marine vessels had for the last eight years been tuned into a scrapyard without any serious operations taking place at the site.

However, the facility was recently reopened to resume operations which has given a ray of hope to the different local service providers including; casual and semiskilled laborers, mobile money agents, hoteliers among others who are reaping reasonable incomes from the site.

Apparently, the port is hosting dozens of people who are carrying out major renovations and repairs on MV Kalangala; a water vessel operating between Nakiwogo mainland in Entebe and Lutoboka bay in Kalangala district.

Jane Namukasa, a dealer in soft drinks reveals that her daily earnings have of late improved due the increased sales to the workers at the facility.

Namukasa who placed her two fridges next to the entrance into the docking site says she has been able to attract increasing number of station workers as well as other people who attracted by the ongoing works.

Safina Namusisi, an attendant as Shaka Zuru restaurant in Bugoloobi explains that the operationalization of the Luzira dry-docking facility is improving their incomes through increasing on the number of their daily customers.

She has asked government to fully operationalized the facility to enable them continue benefiting from its existence through the various opportunities it comes along with.

Meanwhile, Gerald Wagana Odaga, the head of Immigration department at Luzira-Port is among the many people that are excited on seeing the facilty resuming its operation.

He explains that for the last two years he has been at Luzira Port, the dry-docking facility has been laying as a wasted investment, expressing hope that its revival, could reawaken even the idle units at the port which will eventually facilitate more business.

However, Daniel Namakola, a Human Resource officer at Kalangala Infrastructure Services Limited, a private farm that was the first to utilize the facility after its reopening says it offered a host of other benefits to them in terms of building local capacity and reducing the costs required on maintenance.