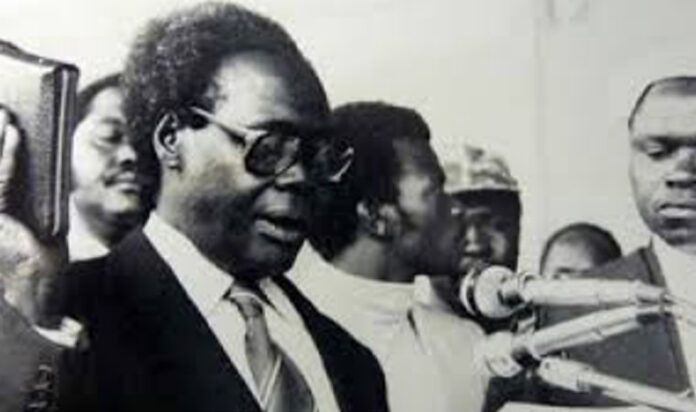 Obote got a chance to gain power in 1980 from a highly contested election that the opposition termed as rigged!

On 10th December, 1980, Apollo Milton Obote was sworn in as Uganda’s president, becoming the first African president ousted in a military coup to recapture the presidency.

Milton Obote took the oath of office Monday as president of Uganda nine years after he was ousted by Idi Amin and called on his countrymen to unite in building ‘a new future’ for the African nation.

Obote, 55, whose election was disputed by the opposition party, drove in his white Mercedes Benz to the steps of Parliament where the country’s new chief justice, George Masika — attired in red robes and a white wig — administerd the oath.

‘In my life I have faced challenges and intimidating tasks,’ said Obote, who led Uganda from independence until overthrown by Amin in 1971. ‘But never have I been faced with formidable challenges such as we now face.’

Hundreds of cheering Ugandans waved posters of Obote and sang and danced as the government and military bands played the national anthem and the theme of the Uganda People’s Congress, Obote’s party.

‘We have problems, we have friends, we have the ability to do a number of things, we have natural resources,’ said Obote, who has promised to abandon past socialist views to rescue the country’s economy from the chaos of the Amin years.

‘It may be difficult but together it should be possible for all of us to rebuild Uganda.’

In Washington, the State Department declined comment on Obote’s election, saying it would rather await a report by a British Commonwealth observer team on alleged irregularities in the election.

Obote called upon the Democratic Party to accept last week’s national elections. But party leader Paul Ssemogerere stayed away from the inauguration and called a strategy meeting of the party’s national leadership.

Obote told the Democratic Party its ‘role as the opposition party is as challenging as the role of the UPC and the government. Our destiny is the same. We either rise or sink together.’

The new president, who spent nine years exiled in Tanzania during the Amin regime, said ‘We shall work for reconciliation, we shall insist on no revenge. The past is gone, we start a new future.’

Obote’s party won 17 seats — more than the margin of victory — after Democratic Party candidates were disqualified. While the disqualifications were based on flimsy legal grounds, the opposition party is expected to have little success in changing the results in court.

The army ousted him for the second time in 1985.