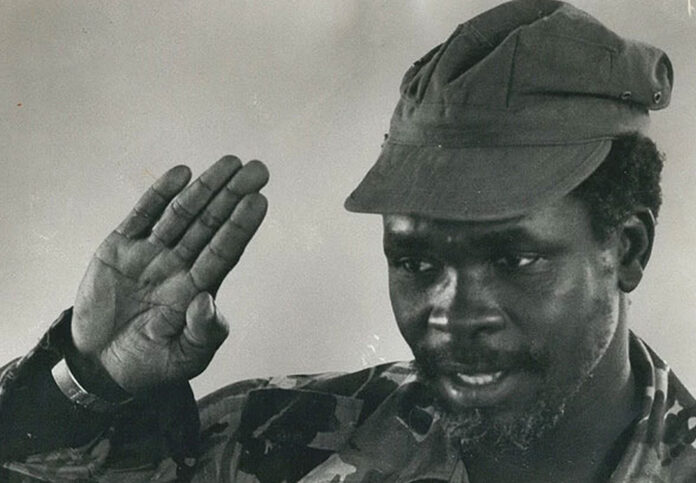 The national interest in the death of the army chief of staff, Major-General David Oyite-Ojok, has been akin to the interest in the deaths of three other well-known Ugandan military leaders that, to this day, remain enshrouded in mystery and lodged in the popular Ugandan imagination: Brigadier Perino Okoya in January 1970, Andrew Kayiira in March 1987, and Major-General Fred Rwigyema in October 1990.

The question is, what killed Oyite-Ojok?

On the morning of December 2, 1983, Oyite-Ojok prepared to fly to the Luwero Triangle. He was having some marriage problems with his wife, Bechi Oyite-Ojok and in a heated exchange she said, “Some of you are going but will not come back!” an angry but unwitting remark that she would regret for the rest of her life.

Oyite-Ojok then set off for the Parliamentary buildings. He wanted to see the Minister of State for Security, Chris Rwakasisi but did not find him there.

Oyite-Ojok then joked with some presidential staff and asked, “Ladies, who of you wants to go with me?” They said they would have loved to but had much office work to do. “I am sorry for you”, he said, “You have missed a free ride!”

He then set off. The helicopter that he usually used — a Bell Augusta 412 model equipped with an autopilot steering system — was grounded at Entebbe air force base for repair and so he was to use the Bell 412 belonging to Captain Peter Oringi who was the commander of the helicopter squadron.

As was the custom, since Oyite-Ojok was a top government dignitary, the director of the air force, Major Alfred Otto, flew him. On that day, the co-pilot was Captain Harry Oluoch.

Oluoch was not trained as a pilot but as a ground engineer and airworthiness specialist, but he had learned to fly and sometimes acted as a pilot.

On board that helicopter that morning were: Major-General David Oyite-Ojok, army chief of staff; Major Alfred Otto, pilot and director of the air force; Captain Harry Oluoch, co-pilot; Major Stephen Abili, the Hungarian-trained Chief of Logistics and Engineering in the army; Lt. Godfrey Kato Kiragga, acting Director of Military Intelligence; Lt. Colonel Wilson Okonga, Medical Superintendent, Mbuya Military Hospital; Captain Charles Kamara, the Israeli-trained chief technician in charge of the air force helicopter squadron; a photographer with the Ministry of Defence (name uncertain); and a Tanzanian Corporal called Friday who had fought as Oyite-Ojok’s aide in the 1978-79 Uganda-Tanzania war and who was the signaler aboard the helicopter that day.

At the time, there were rumours in Kampala that a tenth person on board the helicopter was a woman, a girlfriend of Oyite-Ojok, because Radio Uganda and the state-owned Uganda Times newspaper reported that in total ten people died in the accident.

The helicopter set off for the Luwero Triangle. Oyite-Ojok had mapped out a strategic plan to defeat, once and for all, Yoweri Museveni’s National Resistance Army guerrillas and he was going to lay it out to the field commanders in the area.

Oringi and Nyakairu landed at 11:00 a.m. in a hilly area called Kasozi in Luwero, 150km north of Kampala.

The two pilots had been flying in small 12-barrel, 107mm Katyusha guns to the army encampment in the area, not far from the River Mayanja. The heavy guns were to be used in combat against the NRA guerrillas.

Oyite-Ojok’s party landed shortly after. Oyite-Ojok greeted the troops and started a meeting with the field officers Lt. Colonel John Ogole who was the Brigade commander, and Major Eric Odwar the commanding officer of the Buffalo Battalion and Major Michael Kilama commanding officer of the Air and Seaborne Battalion from Tororo, both of which operated under Ogole’s overall command.

The long meeting ended at about 6:30 p.m. and the teams got ready to return to Kampala. Captain Kamara inspected the helicopters as he always did at Entebbe. No helicopter was permitted to fly out of Entebbe air force base without Kamara having first inspected them.

Kamara, who had trained for helicopters in Israel on maintenance and mainframes, always traveled with Oyite-Ojok on the same helicopter every time the chief of staff took to the air.

Some reports said the helicopters had carried large amounts of fuel on board, since there were no re-fueling facilities.

Captain Oringi and Captain Nyakairu took off first, turned and headed to Kampala. The Bell Augusta 412 carrying Oyite-Ojok lifted off at 8:15 p.m.

However, within minutes of lifting off the ground, the aircraft suddenly nose-dived and plunged to the ground where it burst into flames, killing all on board.

All were burnt beyond recognition except for the acting director of Military Intelligence, Lt. Kato Kiragga who was seated to the left while the helicopter tilted toward the right. Kiragga’s lower body was burnt but parts of his torso and upper limbs were intact.

The manufacturers of the helicopter, Bell of Texas in the United States, later sent investigators to Uganda and whom Ugandan airworthiness inspectors and aviation safety crews from the Ugandan Civil Aviation Authority joined.

The combined investigation discovered that the rod the leads from the helicopter’s main body to the antitorque blade had either been broken or damaged enough to later break off in the first few minutes of the return flight to Kampala.

The antitorque blade is the smaller propeller that rotates at the tail of helicopters and serves the purpose of stabilizing the craft in a horizontal position during flight. A nosedive by a helicopter always points to failure of that blade.

Because Captain Kamara regularly and carefully inspected the Bell-412 and Jetranger-3 helicopters at Entebbe before they flew, it is unlikely that rod connecting to the antitorque would have got so worn out over time as for Kamara to fail to notice it.

What could have happened?

When the Milton Obote government took power in December 1980, the Ministry of Defence immediately set about trying to acquire new helicopters since all those that had served the Uganda Army under President Idi Amin had been destroyed or fallen into disrepair.

Amin’s air force had fleets of Bell Augusta 205, 206 and Jetranger-2 models, most of which had been bought brand-new from Italy.

The UNLA wanted to buy Puma helicopters but because most of the Ugandan pilots were familiar with only the Bell and Jet ranger models, it was decided that these would be bought.

When chief of staff Oyite-Ojok and the Secretary for Defence, Nathan Obore approached Bell in Texas, Bell aid that since Uganda did not have a defence pact with the United States, Bell could not sell Uganda combat helicopters but only the non-combat kind used by the Police Air wing and other civilian purposes.

The Ministry of Defence was advised to purchase the aircraft from the Bell subsidiary in Milan, Italy, which sold helicopters to the Africa and Middle East region.

But because at that time there was an armed insurrection in West Nile, the Ministry of Defence felt the matter had to be handled urgently and approached a London-based company that manufactured military hardware called J & S Franklin Ltd, which at that time was supplying uniforms to the UNLA.

J & S Franklin discovered that the Caribbean island nation of the Bahamas had made an order for Bell-412 and Jetranger-3 helicopters from the United States but had somehow failed to pay for them.

Using a front company to past the rules that barred a non-treaty nation like Uganda from buying Bell’s aircraft, J & S Franklin bought the six Bahamas aircraft from Bell Texas.

The Canadian company also hired three people — a Swiss engineer and two Canadians, one a pilot, the other a technician — to work alongside Ugandans to revive the defunct Uganda Air force.

The Swiss and the two Canadians all drew lucrative expatriate salaries and lived a comfortable life at the Lake Victoria Hotel in Entebbe that acted as their residence. One of the Canadians was found to be less than well trained.

In an incident in September 1983 during which Oringi and one of the Canadians flew the army commander Lt. General Tito Okello to his home in Kitgum, Oringi tried to test the Canadian.

On the return flight, the Bell-412 helicopter encountered a storm over the River Aswa and had to make an emergency landing on the papyrus swamp until the storm had passed.

Oringi had told the Canadian to avoid the storm but the Canadian insisted that it was not a threat and flew right into it. Oringi then concluded that these Canadians were earning more money than their skills warranted and he issued a report to the Ministry of Defence recommending that their contracts be terminated.

Angered that their comfortable life in Uganda was about to be cut short by Oringi, clashes and personal misunderstandings developed between the Canadians and the Ugandan pilots.

Although this cannot be ascertained, it appears that one or both of the Canadians decided to take revenge on Captain Oringi by sabotaging his helicopter and perhaps causing his death.

Perhaps even the usually diligent Captain Kamara might have come up against skilled and cunning people who could quietly and slowly sabotage a helicopter in such a way that it would take a long time for the moment of its breakdown to occur.

Whatever the reason, it appears that the rod leading up to the antitorque blade had been tampered with not long before the fateful flight to Luwero and whoever did so knew or assumed that Captain Oringi — who now lives in the United States — would fly on it in the coming days. Oringi appears to have been the target of this sabotage.

As tragic coincidence would have it, David Oyite-Ojok’s helicopter developed problems that week and it was decided that he would fly on Oringi’s helicopter.

As far as can be established, this is the most accurate version of the many that have attempted over the past 26 years to shed light on that helicopter crash.

Major-General David Oyite-Ojok, 44, was not killed by on orders of President Milton Obote, Vice President Paulo Muwanga, Yoweri Museveni, or any other names that have been mentioned from time to time since 1983.

Obote Swearing in as President