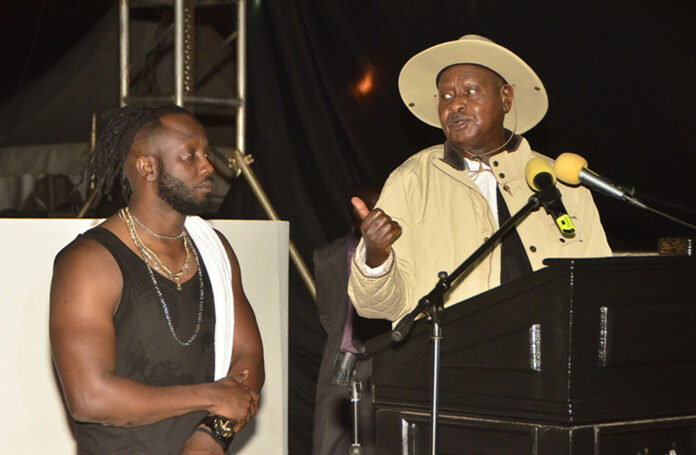 The quest to become the President’s eyes and ears ahead of the presidential elections on January just got intense with some winning favours and others sulking.   Word from a recent State House meeting is that senior NRM mobilizer and Silent Majority boss, Moses Ssali a.k.a Bebe Cool sulked and stormed out of a meeting after being ignored by President Museveni.

President Museveni, has lately been inviting few groups of people he works with to have a little chat over certain issues together at the statehouse in Entebbe

This time around, he invited all artists that have been playing a huge role in ensuring that he is re-elected

According to King Michael (Michael Mugwanya), when the president opened the floor for the artists to air out their opinions and suggestions, everyone was allowed to talk. But when it was Bebe Cool’s time to speak, the president didn’t let him speak but said that Bebe Cool always has a lot of nonsensical things to say, instead, King Michael was called next to speak.

With anguish Bebe Cool stormed out of the meeting much to the Joy of DJ Michael who always claims Bebe Cool has frustrated his attempts to meet the president.  ” Bebe Cool has a dark heart and does not wish others well.  He has sidelined many artistes, the snub serves him right,” he said.