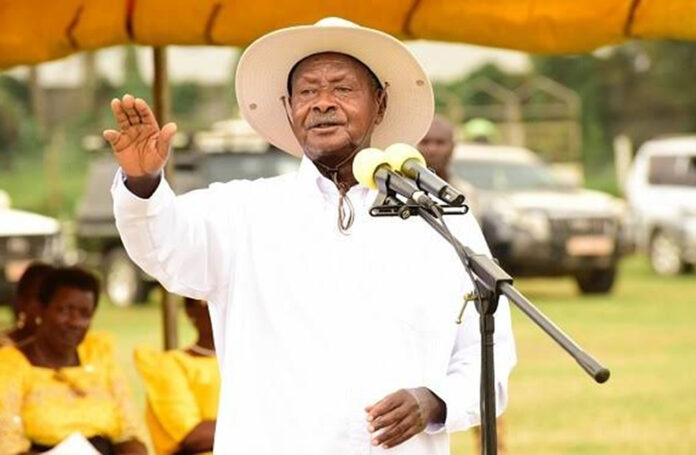 Speaking to NRM leaders  in Hoima Museveni insisted that Kyagulanyi is enjoying backing from foreigners whom he said want to destabilize the country but warned he can’t allow this to happen.

“I know Kyagulanyi and the fools supporting him who don’t know Uganda very well. These include foreigners and others who are here but I know all them. I know that this one is a fool and the other one,”Museveni said.

“They found our children (youths) here and asked them to cause chaos in Uganda just like they did in Libya, Sudan and Zimbabwe not knowing we are a different cup of tea. Those people lit fire on roads not knowing they were spoiling our tarmac,”Museveni said.

The President told the ruling party leaders that Kyagulanyi’s group and their “homosexual supporters” preached hate and riots to youths in several towns in Uganda and this culminated into last month’s protests after the NUP presidential candidate’s arrest by police.

He however insisted that the group tasted a dose of their own medicine when they participated in protests.

“They tried to disrupt Kampala and the army came in. They thought it was going to be like other countries but the army gave them the medicine they wanted. The other time I called Kampala to find out how the city was and I was told even if you abandon a yellow t-shirt, no one touches it because it is hot. No one will destabilize Kampala.”

According to Museveni, the youths are good people but were only misled by Kyagulanyi’s group, adding that he will slowly by slowly work behind the curtains to return them home.

“Those people who had gone to NUP are good. Some of them went to NUP because you(NRM leaders) ignored them. You don’t know how to work with young people. The many mistakes by the old people forced them to leave but I want you to talk to them well to return.”

“I will capture Kyagulanyi’s group , you just wait. I work underground but I will finish them. As you are up shouting hooray, I am working underground,” he noted.