The Inclusive Green Economy Network-East Africa (IGEN-EA), a local consultancy, undertook research titled “Tourism Opportunities of Bugoma Forest” between April and June of this year in an effort to better understand the tourism opportunities in and surrounding Bugoma Forest.

According to a study recently conducted to determine the tourist potential of Bugoma Central Forest Reserve in western Uganda, turning the forest into a national park may bring in at least Shs 2 billion in yearly tourism income for the country.

The government, sugar producers, Bunyoro Kingdom, and conservationists have all argued that the Bugoma Central Forest should not only be preserved due to its diverse plant and animal life but also due to the expanding oil business in the area over the past six years.

The main tourist attractions in and around this tropical rain forest, which is located in both Hoima and Kikuube districts, were recognized by the researchers as chimpanzee and mangabey trekking, bird watching, and nature walks.

According to Legal Notice No. 87 of 1932, the Bugoma Central Forest Reserve, one of Uganda’s most biodiverse, was originally gazetted. An undemarcated reserve of 35,840 hectares was established for the forest. Legal Notice 251 of 1944 increased the forest area to 41,144 hectares. However, sugar barons, loggers, and even cultivators have recently started to infringe on it.

The second major sugar mill in the Bunyoro sub-region, Hoima Sugar, was formally opened by President Yoweri Museveni in 2016 after receiving a sizable piece of land from the Bugoma Forest to develop its sugarcane estate.

The National Environment Act of 2019 states, “Before making a declaration under subsection (1), the minister shall ensure that an environmental impact study and any other study that may be necessary have been undertaken in compliance with the National Environment Act, 2019.” There aren’t any continuing discussions between UWA and NFA to designate Bugoma forest as a wildlife reserve, according to Bashir Hangi, communications manager at UWA.

In contrast, the researchers urge the government to designate Bugoma Forest Reserve as a national park in order to safeguard it, particularly its biodiversity, and boost tourism. The governmental organization responsible for animal protection, the Uganda Wildlife Authority (UWA), is another request made by the researchers. The National Forestry Authority has jurisdiction over the forest as it does over all other forest reserves in the nation (NFA).

The Ministry of Tourism, Wildlife and Antiquities, UWA, and the Uganda Tourism Board (UTB) should in consultation with all other tourism stakeholders develop a tourism development strategy for Bugoma forest, according to the report. “The forest should be put under UWA’s management after being turned into a national park,” it states.

According to official government statistics, Uganda welcomed over 1.5 million visitors in 2018 and received nearly US$ 1.6 billion in tourism-related profits. Later, the government unveiled an ambitious aim to boost the tourist industry’s earnings to US$1.862 billion while maintaining its 667,600-person job contribution to the overall labor force.

The government declared that in addition to expanding, preserving, and diversifying tourism-related goods and services, it would also launch a marketing campaign to promote both local and international travel.

The tourism potential of Bugoma

The reserve is home to primates, elephants, and other vertebrate wildlife, according to the study “Biodiversity assessments of Bugoma forest reserve, smaller central forest reserves, and forest corridors south of Bugoma.” 225 bird species, the Ugandan mangabey (which can only be found in Uganda), bush elephants, butterflies, and 570 chimpanzees all call the forest home.

One of the biggest advocates of turning Bugoma rainforest into a national park is Robert Akugizibwe, executive secretary of the Association for the Conservation of Bugoma Forest, a local pressure group for conservation. His organization has been leading people on special nature hikes inside the forest for the past five years.

The encounter with the primates, particularly groups of the Ugandan Mangabey, which are endemic to this forest, is Bugoma’s main draw, despite the forest’s abundance of attractions, including butterflies, insects, and bird species like the Black and White Casqued Hornbill, Black-billed Turaco, and the Olive Sunbird. The red-tailed and black-and-white colobus monkeys are the other primates that are frequently seen.

In fact, there are now active initiatives to accustom chimpanzee families to support tourism, and the Jane Goodall Institute anticipates wrapping up this project in 2023. But Akugizibwe is displeased to see how the sugarcane farmers are encroaching on the forest’s borders.

“We have been trying to promote tourism for the last two years, but we have been abandoned,” Akugizibwe continued. Everyone ignores us, not even the NFA. The exact location of the forest’s boundary was unknown to us. Let the Uganda Wildlife Authority take over management of Bugoma and elevate it to the status of national park.

The potential for tourism’s economic success

The Inclusive Green Economy Network-East Africa (IGEN-EA) study, however, presents the most optimistic assessment of the economic viability of the discovered tourism opportunities in the Bugoma Forest, as well as the anticipated earnings from the activities and the most popular tourist destinations in Uganda as determined by the Uganda tour operators who were interviewed for the study. 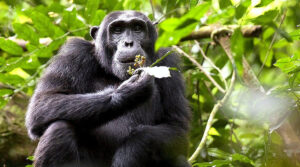 The researchers claim that it is feasible to organize chimpanzee trekking in Bugoma Forest by drawing inspiration from current chimpanzee trekking practices in parks that have already been established, such as Kibale National Park, Kyambura, and Kalinzu Gorges, where permits cost between US$ 50 and $200.

For example, according to the researchers, while two groups of eight visitors each are often allowed to hike chimps in national parks like Kibaale, scientists recommend that just four people per group be able to do so for recently habituated chimpanzees like those in Bugoma.

They contend that chimpanzee hiking permits in the Bugoma forest should cost US$50 because it is a new location and will not be as well-known as the more established trekking locations. The report also mentions that two trekking excursions with a capacity for four tourists each will be planned for each day.

The study also charges five tourists US$80 each for one session of bird watching every day. In part, the paper states, “Bird viewing in woods requires patience and is typically a whole day affair, so just one session a day may be scheduled.

In Uganda, the cost per visitor to see birds is now set at US$100. However, given that bird watching in the Bugoma Forest is new, it would be wise to charge a lower price of US$80 to entice tourists if the activity is permitted in the forest as advised by this study.

The researchers claim that two sessions in the mornings and nights might be scheduled for the other activity, forest walks, at the current costs of up to US$30. The study found that, in order to preserve the peace of the forest, the number of tourists participating in bird watching and forest walks should be kept at five and 10, respectively. The tourists would then be able to hear the forest’s beat.

They continue by saying that Bugoma Forest can be used for cultural tourism. For instance, one of the research participants questioned states that “Bunyoro Kingdom’s former capital was located in a portion of Bugoma Forest.”

“In that region, there were palaces for two Bunyoro rulers. The Omukama (King) Nyamutukura Kyebambe III relocated his palace from Buyaga to Kyangwali, which is where a portion of the Bugoma forest is located, in 1830. It is terrible that a small minority of the kingdom allowed this region to be devastated out of self-interest. If preserved, the forest could contribute to Bunyoro’s cultural legacy and be used to promote tourism.

“The forest is also taken in extremely high esteem as a traditional pharmacy with all kinds of herbs collected from leaves, tree bark, vines, and roots,” the responder continued. Indigenous groups often carry out other traditional rites beneath the protection of the forest. Potentially, this area could become a Bunyoro cultural site.

A joint report from the Uganda Wildlife Authority and the National Forestry Authority, completed in 2018, recommended that Bugoma’s protected area status be upgraded to national park status. George Owoyesigire, the acting commissioner in charge of wildlife conservation in the Ministry of Tourism, Wildlife, and Antiquities, stated that he would support this recommendation.

Elgon, Kibale, Mgahinga, Bwindi, Semliki, and Rwenzori, among other former Central Forest Reserves, have been upgraded by the government to national park status, he continued. The species have subsequently multiplied, and the advantages to the nearby community have also been strengthened due to the increased revenue generated from these national parks. These were all transformed into national parks and their protection levels were upgraded.

The proposed oil refinery will be located in Kabale Industrial Area, around 0.5 kilometers from Bugoma Forest. As a result of its proximity to Kabale International Airport, which is soon to open to international air traffic, Owoyesigire predicted that Bugoma would generate comparable income.

Moving forward, the Ministry of Tourism, UTB, UWA, and other stakeholders should continue efficient community outreach services while advancing the plan and tourism operations in the Bugoma forest. For communities to take part in tourism activities in the Bugoma forest, training should be provided in tour guiding, crafts, beekeeping, catering, and other services.

In order to increase the number of chimpanzee groups habituated for tourism in Bugoma Forest, the government and development partners should also help organizations like the Jane Goodall Institute. Second, the government should encourage localities to form partnerships between public and private businesses to promote community tourism.