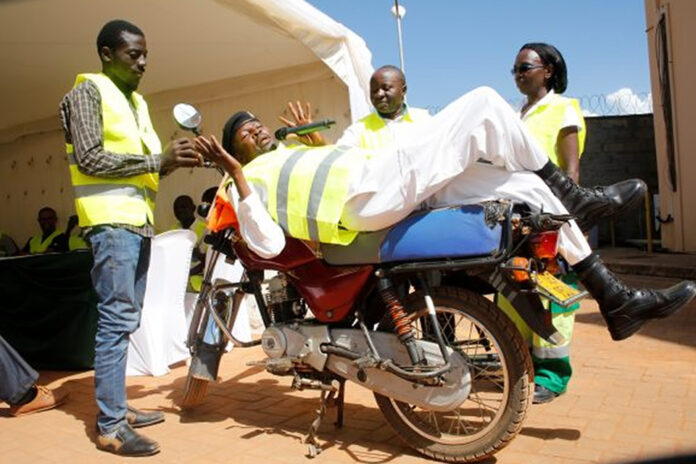 They may have waltzed their way into the Oxford Dictionary but boda bodas are still considered by many to be one of the riskiest means of transport in Uganda owing to the numerous traffic related incidents involving them.

Recent media reports have quoted officials from Mulago National Referral Hospital as saying that of 60 casualty patients admitted at any given time, 80% are usually boda boda accident victims.

The patients’ long stay in the hospital eventually affects the quality of life they live given that some of the injuries sustained are grisly, leaving the victims incapacitated.

It is against the backdrop of these shocking statistics that building solutions firm, Hima Cement and the Uganda Traffic Police have initiated a partnership, aimed at sensitizing and equipping the riders with safety measures as well as basic first aid skills.

Speaking during the launch of the partnership at their depot in Namanve near Kampala, Daniel Petterson, the Hima Cement Country CEO reminded the boda boda riders that they have dependants and as such shouldn’t risk their lives for the sake of an extra penny.

“At the end of the day, this sensitization initiative is actually not about you the rider but about your children, spouses, brothers. Even the passengers you transport have families to go back to. How would they (families) survive if anything happened as you go about your errands?” he said.

Adding, “You (the riders) are the ones who can make a difference. Let’s work together to make a positive change and save lives. Hima Cement will find ways to work with you.”

Patrick Waswa, the Hima Cement Logistics Director explained that the need to sensitize the boda boda riders isbecause Hima Cement is one of the major road users owing to the number of cement ladenplying different routes in the country.

“We have between 80 to 120 trucks on the road daily and majority of the incidents we find on the roads involve motorcycles. Many of these incidents are because the riders try to force their way through narrow sections of the different highways. So we felt that we needed to educate boda bodas on how we can both maximize benefits from these roads,” he noted.

AIP Juma Maggwa, the second in-charge Traffic in Seeta while speaking to the riders cautioned them against consuming alcohol before riding and also urged them to get necessary documentation so as to avoid fines.

“Keep away from those alcohol sachets if you are planning to ride. These motorcycles are good but also deadly. Make sure to have a permit. Many times you are on the right but because you do not have permits, many of you try to flee the accident scenes,” he remarked.

Hima Cement donated several items to the boda boda communities of Seeta and Mukono that included reflector jackets, that will help other road users identify them clearly.