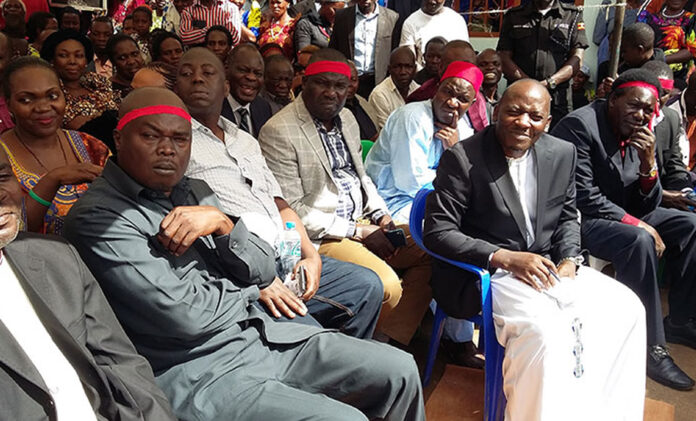 LWENGO – What started as mourning the death and burial of Mzee Vincent Nsamba (76 years); father to Masaka Municipality MP Mathias Mpuuga turned politically chaotic a few minutes after the arrival of Kabula county Member of Parliament James Kakooza one of the MPs supporting the removal of the constitutional age limit for the Presidency. The incident happened on Sunday evening at Nakawanga village, Kisseka Sub County, Lwengo district where a group of mourners got angry upon seeing Kakooza and attempted to rough him up; only to be saved by Buganda Katikkiro Charles Peter Mayiga.

Kakooza, who arrived at the burial grounds at around 3.00 pm, was first denied a break through to the congregation where several MPs and dignitaries were seated, kept smiling as several youths heckled and abused him, while chanting the “Togikwatako” slogan and threatening to throw stones to hit the former primary health care state minister.

“He should not come here or else we attack him” Youths dressed in T shirts branded with the “Togikwatako” slogan shouted.  “He is a traitor, he should leave. We can’t welcome him here,” they added.

The chorused mockery instantly attracted attention of the whole congregation that many people were seen rising to catch a glimpse of Kakooza as a group of charged youth advanced to rough him up, but MP Mpuuga swiftly intervened and to cool down public temper by dissuade the youths

“No you let him attend, Kakooza is my friend. He is just like many of our fellows who deserve to be liberated from the wreckages of rotten system in which they got trapped,” Mpuuga noted as he secured Kakooza from the charged mob.

“We should Blacklist him. He is part of the team that has left us suffering all this long” some elderly women asked youths as Kakooza arrived.

Coincidentally, Kakooza’s armed escort was blocked at the entrance, and as Katikkiro Mayiga’s security details was securing for him entrance into the congregation, several residents turned to stoning the MP’s vehicle in protest of his presence at the opposition dominated burial.

The unpredictable situation prompted the driver of the MP’s vehicle (Pajero Mitsubishi) together with a host of different security persons to hide the vehicle which prompted the Buganda Premier Charles Peter Mayiga to also plead with the angry congregation to “forgive” MP Kakooza since it was time to mourn the late MP Mpuuga’s father.

“You are all Kabaka’s subjects and am your elder brother, so I would not like to witness any embarrassing scenes amidst us, I will request you not to do anything bad to (MP) Kakooza,” Buganda Premier Peter Mayiga pleaded is his speech, before castigating legislators who sell their conscience at the expense of the country’s tranquility and will of the electorates.

The Controversial legislator could hardly find comfort at the burial as all speakers directly rebuked him and the ruling government.

“What is happening in the countryside is a direct indicator that majority of citizens are no longer supportive of your selfish agendas. I wonder why Kakooza and his group have adamantly kept a deaf ear to such indicators” the Kampala capital city mayor Elias Lukwago noted amid chants from the congregation.

Earlier in the day, Reverend Monsignor George William Lubega, the former Vicor General of Masaka diocesan, who led the requiem mass, extolled MPs opposed lifting of the presidential age limit, for standing their grounds to reject the amendment amid tough challenges.

He likened the MPs that were brutally thrown out parliamentary chambers, to heroes whom he said the electorates ought to hold in high esteem for struggling to defend the constitution.

Fr Lubega also read out what he said was message written in 2005, by Cardinal Emmanuel Wamala warning parliamentarians against the repealing the presidential age limit. The last cap after they removed the term limits.

The Forum for Democratic Change FDC former presidential candidate Kiiza Besigye, revealed that their next course of action would include going around the country imploring the citizens to join the MPs to resist what her said was bad rule and reclaim the country’s leadership.

The current political stalemate stems from a motion tabled by the Igara West MP Raphael Magyezi seeking leave of Parliament to draft a private members bill on constitutional amendment with a proposal to lift the presidential age limits.

However, when contacted via his cellphone Kakooza downplayed the threats against him. “My intention was to go for burial and I did. Those who threatened me were planted by several opposition politicians who wanted to frustrate me. Instead of writing on such an incident, why don’t you talk about Mao (DP President) who spend the day abusing the President (Yoweri Museveni)”