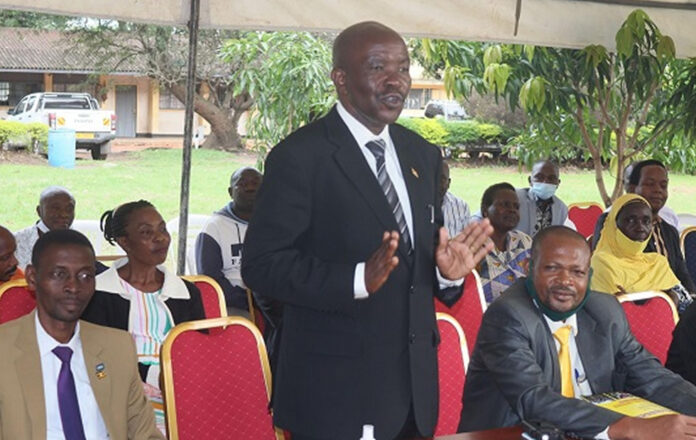 Godfrey Kabyanga, the Kasese Municipality Mayor has showered President Yoweri Museveni with praises for what he described as devoted efforts towards pacifying the Rwenzururu sub region.

Kabyanga who was speaking at the leadership convention of the Urban Authorities Association of Uganda-UAAU, convened at Hotel Brovard in Masaka district since Tuesday.

In his speech before president Museveni, Kabyanda observed that businesses and specifically Tourism is booming in the whole of Kasese sub-region because it was secured by government on directives of president Museveni.

In November last year, the army invaded the Obusinga Bwa Rwenzururu Palace in Kasese district and killed dozens of occupants (mainly royal guards) attached to the Cultural leader; Omusinga Charles Wesley Mumbere, before he was also arrested and currently facing a series of charges including treason.

Despite being out on bail, King Mumbere is still restricted from going go back to monarchy in Kasese area.

Kabyanga says following that incident that happened one year ago, normalcy returned to the region which has given them as leaders and the citizens a ray of relief.

But Museveni tactically avoided responding to Kabyanga’s statements and instead focused his address at encouraging urban council leaders to refocus their planning methodologies towards realizing holistic development of their respective areas.

He on the other hand found affirmed government’s commitment to harmonize the salary structures for civil servants, a problem that has lead to a series of industrial actions in the different sectors of the country.

Museveni noted government is cognizant of salary inequalities of public servants however adding that they are working out modalities to ensure that the problem is decisively addressed given the country’s current economic stand.