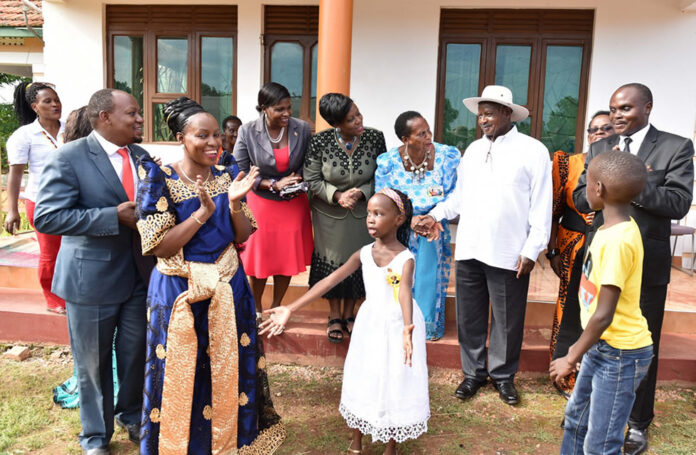 BUKOMANSIMBI; When the junior youths and Children affairs minister Florence Nakiwala Kiyingi unleashed plans to hold a thanks giving fete in honor of her appointment, dust rose within Bukomansimbi district and in the opposition Democratic Party; with an emergency of two factions opposing each other.

At first several members of DP raised their voices against Nakiwala’s ministerial appointment by President Museveni, with many urging her to decline the job under the NRM government, a call she did not heed to.

Being a former DP candidate for Kampala woman MP seat and wife to the Party’s former deputy treasurer, and Bukomansimbi County Member of Parliament Deogratius Kiyingi, many people feared that Nakiwala’s acceptance of the appointment would wreck her political career and holding the party in disrepute.

Upon assuming her new-job, Nakiwala started off by moving steadfast with her ministerial duties, concentrating much on mobilizing youth groups in her husband’s constituency of Bukomansimbi South.

However, her actions angered a section of Uganda Young Democrats (UYD) members, who out of great suspicions of Nakiwala’s allegiance to the opposition, chose to petition DP national executive committee demanding that she suspended for openly serving the NRM interests.

Her decision to invite the President also generated mixed reactions among party members, with some viewing it as a clear manifestation that she no longer subscribes to DP.

“Ms Nakiwala is publicly promoting the NRM ideology, which is wrong. She has since changed into an NRM mobilizer hence a liability to DP in whose structure she seems to operate under, “Paul Kamuli, who leads the anti-Nakiwala petitioners partly wrote.

However, another faction led by Isaac Lwanga, the Bukomansimbi UYD vice chairperson, who lead the pro-Nakiwala youth faction described as irrational the petition generated against the minister, whose appointment they claim is an opportunity for the opposition youth to also benefit from government program.

The political situation remained tense in Bukomansibi until the last day when the party was hosted with president Museveni presiding over as chief guest.

At first the thanks giving ceremony was slated for March 14th but is was postponed to 28th, for purposes of allowing the chief guest ample time to attend in person.

The extension generated debates within the district but Sobuja.org has learnt that this become a disguised opportunity that gave the cerebrations a new tone. It gave more time to the organizing committees to spice it.

Some DP and NRM members in Bukomansimbi for the first time joined hands in the preparation for President Museveni’s visit to the district. The Bukomansimbi south MP Deogratius Kiyingi told us his wife had become a unifying factor that will earn the area development.

“Our pursuit is to make this area better through improving agriculture and these are the promises we made during campaigns, therefore we can’t afford missing such a grand opportunity,’ Kiyingi said.

Nakiwala made her thanksgiving ceremony somewhat a beneficial happening to local population Bukomansimbi. The district being the leading producers of coffee in the greater Masaka sub region; she derived the idea of initiated an agricultural-tourism exhibition.

Farmers from the different Sub Counties led by the biggest cooperative in the area (Kibinge coffee cooperative society) showcased their products and farming skills.

In the expo, the Uganda Wildlife authority for the first time brought different wild animals it Bukomansimbi which exited a number of the residents. The locals were also showered with free food and drinks.

On Tuesday morning, the dusty Kyabakuza- Kibinge-Mateete road became busier and many residents were seen flocking Buyoga playground to be part of the function that had been advertised for months.

The function was graced by numerous diplomats, ministers and MPs. Beside politicians, artists made the day for the locals.

Most of the locals were excited as ministers and MP displayed their deadly strokes as they danced with different artists.

Later in the evening, the president also arrived in Democratic Party’s ancestral district, where he also held a closed meeting with the Masaka Diocesan Catholic Bishop, John Baptist Kaggwa.

While addressing the gathering, president Museveni vowed that his government will decisively defeat criminal elements that have engaged in urban and rural.

The president’s remark followed the cry out by MP Kiyingi on insecurity in Bukomansimbi and the entire southern region.

“The NRM government has a greater capacity than ever before. We defeated the Karimajong cattle rustlers when we didnt have this capacity. We can’t fail to defeat these terrorists with our current capacity both in urban and rural areas,’ noted president Museveni.

Meanwhile, the president applauded minister Nakiwala whom he said is proactive and has capacity to mobilize youth to engage in development activities.

The thanksgiving fetes that met great opposition however came with rains of blessing to the communities in Bukomansimbi, after it was named the country’s first agricultural tourism district, with direct benefits we are yet to find out.

As usual president Museveni’s visit came with material and financial pledges both to individuals and farmers’ cooperative societies.