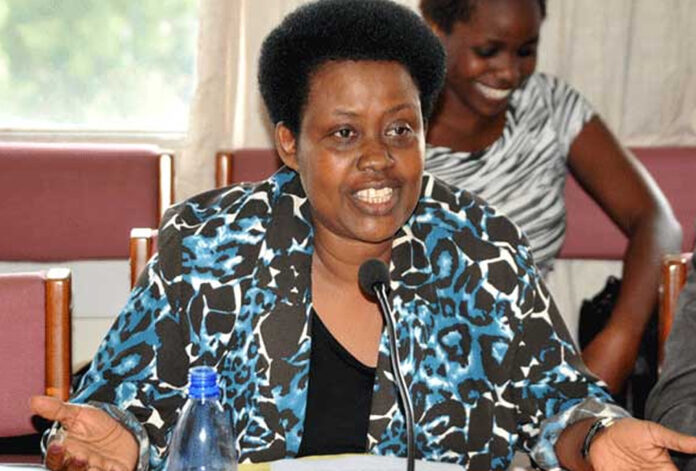 SEMBABULE: The Minister of state in charge of Animal Husbandry Joy Kafula Kabatsi has pour scorn on Lwemiyaga county Member of Parliament Theodore Ssekikubo for neither supporting the age limit bill nor promoting development within the constituency.

While addressing a host of NRM members in Lwemiyaga County at Ntuusi sub county head quarters on Thursday, Kabasti said Ssekikubo seemed rather displaced to offer constituents Shs 5,000 each to reject the constitutional amendment but never initiated any development program in the constituency during his term of office as MP.

“He gives you (lwemiyaga residents) shs 5,000 to support his irrational interests. He even lies that he works for the president which isn’t true.” Kabatsi told her audience that attended the meeting held in Ntuusi sub county council hall.

Notably, Ssekikubo and Kabatsi have for the past two presidential elections acted as close political allies who often toiled together towards winning parliamentary seats in Ssembabule district. However, the later has never made to parliament through an election, only for the president to appoint her a minister recently.

A fortnight ago, Ssekikubo rallied residents in the same constituency against the amendment of article 102 (b) of the constitution with an aim to preserve and protect the supreme document in the land.

However, Kabatsi wondered why Ssekikubo keep calling himself a close friend and ally of the President whom he usually stubs whenever he fronts an agenda before Parliament.

“When the president met the NRM caucus, Hon Nankabirwa asked the MPs opposing the constitutional amendment move out of the meeting in full view of the president. Even when Ssekikubo pleaded, he (President) kept on taking notes and did not at anytime to defend Ssekikubo, how then is he close to a person who cannot defend him?” Kabatsi asked.

But Ssekikubo; who enjoys overwhelming majority support from his constituency maintains that his political positions are not based of selfishness but on what he calls a true sense of patriotism.

“Actually have the will of the people of Lwemiyaga who have continued to trust me with their votes, and have always stood with me to defeat attempts of rigging their victory,” he says.

In the aftermath of the 2016 election, Kabasti who had lost Hanifa Kawooya in the parliamentary race for the Sembabule district Woman MP; presented to the press several ballot books with pre-ticked papers that had been used to rig the elections.

She alleged that together with her agents, they obtained the booklets from NRM agents who went around the district rigging for the party flag bearers including president Museveni; which according to her was a true indicator that the whole election process was a sham.