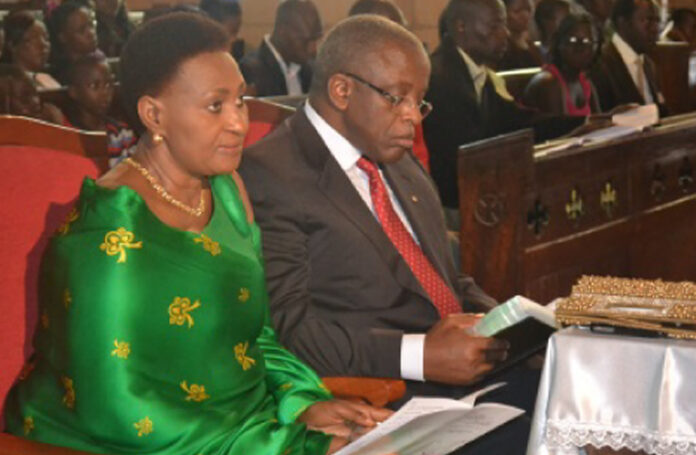 Museveni said this as he chaired the 240 MPs who had convened at State House Entebbe on Monday to discuss why they decided to endorse him to stand for the 5th term.

At the meeting, Museveni made revelations and accusations on how the Party’s Secretary General, Amama Mbabazi and his family are committing crimes of a political nature which are tarnishing the party’s image.

According to Red Pepper, the President believes these crimes,”are meant to undermine and eventually lead to his regime’s collapse.”

Museveni alleges that Mbabazi together with his wife, and sister-in-law Hope Mwesigye are mobilising NRM structures to remove him from power.

“They developed their own concepts which they have been selling to the people,” Red Pepper quotes Museveni. “This is unacceptable because such concepts have never been approved by the party organs. This is therefore misuse of NRM party structures.”

Museveni is reported to have even played to the MPs a secretly recorded private conversation of Mbabazi and his wife Jacqueline as part of the evidence that he is aiming at ousting the president.

The President has threatened to arrest Mbabazi who is yet to face the party’s disciplinary committee which will decide his fate for reportedly “misusing” his office.

On the second day of the meeting, President Museveni also condemned all those MPs who are engaged in underground campaigns saying it is not yet time for politicking.

“We agreed on consolidating party cohesion by enhancing the party’s ability to handle the petty issues that were cropping up. Some issues are arising from some members starting campaigns by meeting rural folks and collecting signatures for this or that purpose.

“We are supposed to be working now and not campaigning,” Museveni said.