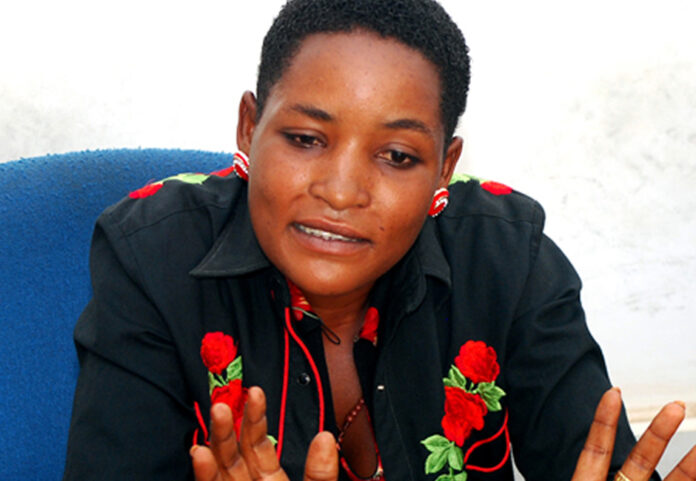 The woman who allegedly first published the letter that eventually got Gen David Sejusa in trouble says she is scared for her life.

Emerging from Sejusa’s shadow, Catherine Ddembe, spoke to  our source on Saturday, and told of deep-seated fears that some people were following her and could try to kill her.

Ddembe became famous among internet users three months ago when a letter, purportedly written by her, appeared on the internet, detailing  a plot to frame senior government officials in subversive activities. The letter also spoke of plans to kill key figures allegedly opposed to what has come to be known as the ‘Muhoozi project’.

The term refers to perceived attempts by President Museveni to groom his son, Brig Muhoozi Kainerugaba, for the presidency.

That letter was later picked up by Gen Sejusa, who demanded an investigation, especially into the alleged threat to anti-Muhoozi officials. Sejusa’s request kicked off a political storm that has rocked the country for the last fortnight – and left Catherine Ddembe rattled.

“I have so many people calling me. Others pretend they are from the media and some are security people. I fear for my life,” Ddembe, a member of the opposition FDC, said in an interview at source head offices in Kamwokya on Saturday. She appeared quite calm and was accompanied by a close friend and FDC activist, Robert Kavuma.

Ddembe says she will not despair.

“As a human being, you can be scared but you reach a level where you say it is only God who can protect me. If [James] Kazini [former army commander], who used to move with so many types of guns died mysteriously, then how about me?”

Speaking about the controversial letter, Ddembe roundly denies ever writing it, saying someone only used her name to post the document on social media.

“First of all, the document was not signed. I was so happy when [General David] Sejusa said let this document be investigated, why don’t they investigate? I don’t know why they are interested in using my name. I thought they meant another person who shared my name,” she said.

Wafula Oguttu, the FDC spokesperson, said on Saturday that Ddembe told the party she didn’t know about the document.

“She told us that someone simply used her name but that she did not write it,” Oguttu said.

The Ddembe document was largely ignored until Gen Sejusa, the coordinator of intelligence services, followed it up and demanded a probe into the alleged plot. Sejusa, who is in Europe, has since been placed under investigation on suspicion of subversive activities, and faces arrest when he returns. President Museveni has demanded that Sejusa should apologize for his subsequent remarks, or face arrest.

Part of the letter Ddembe allegedly authored says that around September 2012, she was requested by her friend Ssebina [Ssekitoleko] to meet one of President Museveni’s loyal generals to discuss some urgent matters. She says she agreed to meet the loyal general in his office in Kampala.

“He asked me to do a mission for him and in return, I would be paid whatever I wanted,” reads the letter, addressed to President Museveni.

The general allegedly wanted Ddembe to visit her friend Michael Kabaziguruka, the vice chairman of the FDC Electoral Commission at Luzira prison, where he was remanded on treason charges. She was to convince Kabaziguruka, and Frederick Namara, a former soldier with the Presidential Guard Brigade [PGB], to confess that they were part of a rebellion led by former FDC leader Dr Kizza Besigye.

“I got worried when [the general] also asked me to say that the Prime Minister Amama Mbabazi, Chief of Defence Forces General Nyakairima, General David Tinyefuza, and others were the funders and leaders of this rebel group … If Kabaziguruka and the others agreed to cooperate, they would get their freedom and Shs 200m each,” reads the document.

Ddembe also purportedly heard the loyal general receive a phone call from someone he kept on referring to as MK, but which is generally taken as a reference to another of the president’s trusted generals.

The loyal general reportedly told MK that he had received reports that the Besigye/Mbabazi/Tinyefuza group were planning to ambush the prisons vehicle that was transporting the Kabazigurukas to court and kill the suspects in order to stop them from talking.
Ddembe on Saturday roundly denied ever meeting the loyal general.

“I have never met him physically. I always see him in newspapers.”

But according to the letter, the loyal general also reportedly told MK that the group had some rebel troops already stationed in Kampala and were planning to attack Mbuya military barracks, Naguru police barracks and other isolated police stations in central region.

The letter has split opinion as regards its genuineness. While some people see it as a window into how the intelligence organs operate, others fear it could be fiction, whose purpose may be yet indiscernible.

Yet there are minor coincidences that suggest the letter should at least be looked at critically. For instance, the letter spoke of attacks on police stations like Mbuya, weeks before the March 4 attack on Mbuya army barracks. It is instructive that, the army said the Mbuya attack was “stage-managed”, ostensibly to create a façade of imminent insurgency.

The letter also draws a link with what had been unfolding during the trial of the five FDC members linked to rebellion, including Kabaziguruka. In October 2012, the media reported that court had banned counter-terrorism police from escorting the five treason suspects.

“Having police officers in black, armed with guns and escorting the accused in the instant case and waiting for them around court amounts to torture on the accused,” said Nakawa Court Magistrate Gladys Kamasanyu.

On Saturday Ddembe acknowledged visiting Kabaziguruka at least thrice every week while he was at Luzira prison. When asked why she made such frequent visits, she responded, “He is very close to me.”

She also stood as one of the sureties for Kabaziguruka and managed to secure Shs 5m for his release. She said: “I was in the National Executive Council (NEC) meeting and I told party members that Michael was granted bail and was required to pay Shs 5m. I worked hard to fundraise the money from members and some of the funds came from the [party president] Muntu’s pockets.”

Ddembe told us that some people had asked her to meet the president.  “I cannot meet him [Museveni] because I’m not part of their problems. Why should my name be dragged in a fight of generals?”

Ddembe said she had consulted many people, including religious leaders, who advised her to seek solace in God. She, however, said the opposition needed to prepare itself in light of Sejusa’s comments.

Before the circulation of this document, Ddembe, an FDC councillor in Mpigi district, was largely associated with opposition politics. She had been arrested a number of times and was held in Luzira prison for a few days. She was also acquitted of murder charges in relation to the slain police officer John Michael Ariong who was hit with a stone during a protest march against the poor state of Kafumbe-Mukasa road in Kampala in 2012.