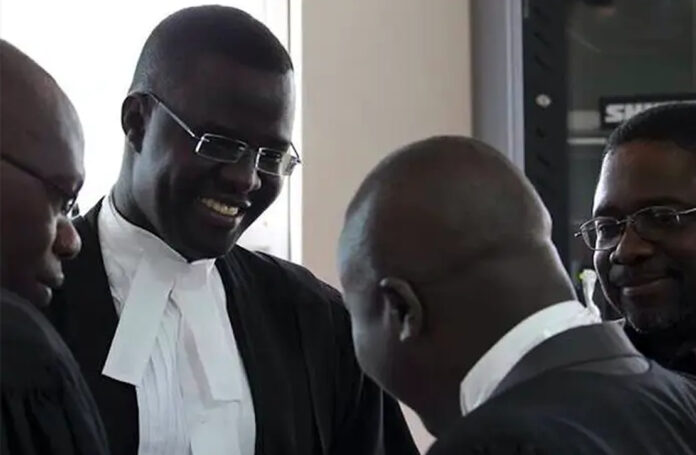 He grew up in Gulu at the height of the LRA Conflict, walked four kilometers to sleep on the verandas of Gulu town to avoid abduction, but Nicholas Opiyo managed to grow up into a prominent lawyer and human rights activist in Uganda.

Mr Opiyo had a one on one with Uganda Record about his career and perception on the current issues in the country.

Tell us a brief background about yourself?

Nicholas Opiyo is a very humble lawyer. Currently the secretary of Uganda Law Society, board member of the Anti Corruption Coalition Uganda, a leader of the Chapter 4 Uganda among other things. Born in a remote village in Amuru district, I lived in Gulu at the height of the conflict, was a night commuter as a child, who made his way by sheer luck.  I went to Uganda Christian University for my degree, to Makerere University for a postgraduate and then Law Development Centre for diploma in legal practice.

Was being a lawyer always your dream career as you grew up?

No. I actually wanted to be a journalist. As early as my primary school, my father used to make us listen to BBC Focus on Africa and would ask us questions about the news. I think I wrote my first article in the Daily Monitor when I was in senior two. But my thought about being a lawyer turned around in 1994 when my cousin brother was running for a post in Gulu Municipality . He struck me as very smart and so he inspired me to become a lawyer. By then, he was also an advocate for the Legal Aid Project of the Law Society in Gulu. He tutored and mentored me, so I wanted to be like him. Reflecting back on my background as a night commuter, walking 4 kilometers to sleep on the verandas of Gulu town to avoid abduction , seeing my father being brutally arrested by the government troops in middle of Gulu Town in 1989, I felt a strong urge to do something about it.

Have you ever regretted being a lawyer?

There are challenges about being a lawyer in terms of public perception  but I enjoy every single minute of my profession. The beautiful thing about it is I get to do what I actually wanted to do as a journalist.

What do you consider the biggest challenge you have faced in your career?

There are several but the biggest challenge of them all is that of perception. People used to look up to lawyers, but now the profession has kind of lost credibility because of the many things that happen in the practice but also because of the understanding of what lawyers do. People think all lawyers are liars. However, I think another huge challenge of being a lawyer is the fairly, under-developed justice system in Uganda.

Have you ever been threatened by a person because of work?

Yes, several times I have received threats, intimidation and all kinds of things. But those things are just threats. If somebody wanted to do harm to you, they wouldn’t warn you. They just want to scare you are break your spirit, although I don’t take them seriously.  The only thing that people say in my tribe that keeps me going is that “You can postpone a date for burial.” Your death is pre-determined by some fate.

What is the most important thing that has ever happened to you in your career?

Growing up in northern Uganda in extreme poverty, hardship at the height of the conflict, having to sleep on verandas, to live off relief aid, seeing my father and family line up for yellow posho and second hand clothes, I would never have imagined I would be where I am today. Being able to emerge from that surrounding to be what I am, is the most important thing that can ever happen in my life.

What is your opinion on the way Ugandan youths, politicians and police handle demonstrations?

First, the principle has to be under-scored, but there is an inherent right to peaceful demonstration provided in our constitution that everybody must be allowed to exercise that right in accordance with law. That to me is the principle. It is how democracy is functioning. Democracy is exchange of ideas; people must be involved in their governments either by way of demonstrations or presentation. But over time, demonstrations in Uganda have become synonymous in riots. Riots are not demonstrations. So the twisted conception within the police force is that all demonstrations are riots.

Secondly, the mentality appears to be that the role of the police is to block such riots/demonstrations. But I think the role of the police is to facilitate an equal enjoyment of rights for all people in this country so that a person seeking to demonstrate must do so alongside that person who wants to sell her tomatoes on the roadside.  If the police could only grasp that principle, all these demonstrations we had in town would have been very peaceful and organised.

What is your opinion on the recent controversial Anti-gay bill? Do you think it will be assented in the future?

The process of the law becoming the law has now been set in motion. It is an irreversible process in my view. Whether President Museveni decides or not if Parliament has resolved, it will hold its ground and that law will become law by either default or assent of President. That process under Article 9 is irreversible. I don’t agree with the bill myself but I think that the state has no duty in prescribing who you love, don’t love, have safe with or don’t have sex with. Intercourse is an intimate private act between two consenting adults therefore, that cannot be regulated by law, it is unenforceable.

Secondly, you cannot begin to set moral values in a law. Moral values are a process of societal norms taking shape in growing. You cannot prescribe that by law. You cannot impose a majority moral value upon all of us because people behave differently. Therefore, in that respect I think the bill is misguided. This bill affects and defines our sexual life in more fundamental ways than we can imagine.

What is your opinion on the anti-pornography bill?

This is the most useless piece of law I have ever seen. It is an attempt to control the body of a woman. It is just impractical. It is that same mentality of putting moral values on a particular society.

The Uganda Record Spot On Questions

I wake up at around 5:00am, do some reading, listen to the news, reach work at about 7:30am. When I get to my desk, I open and  respond to emails, go to court if there is court, attend meetings if any and I spend most of my time between police and court. In      the evening, I leave work very late like about 9:00pm.

3.What do you love most about Uganda?

4.What do you hate about Uganda?

How people are deeply divided along ethnic lines and the corruption

5.Who is your biggest influence in life?

6. If you were stranded on a desert island, what three items or people who would wish to have with you?

My book, father and a ball

A Long Walk to Freedom

8.What is your favorite place you would love to have dinner from? Any place where Acholi food is served

9.What would you wish to be written on your tombstone?

I don’t want to have a grave. But if someone wanted me to have one, I would wish them to write: Here is the guy who tried to make human rights a reality.

I don’t drink anything alcoholic

11. When was the last time you cried?