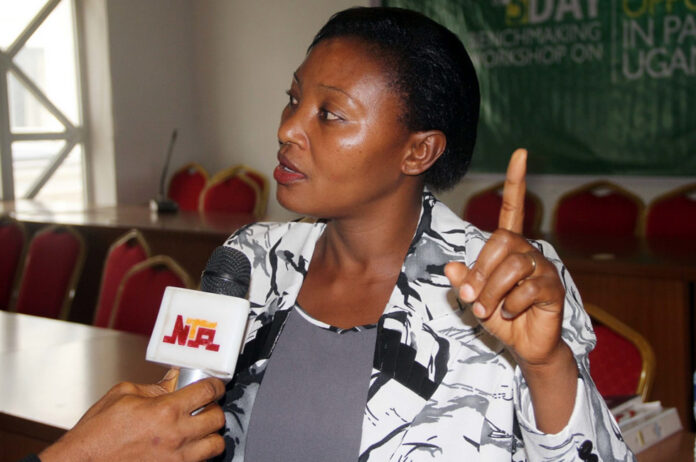 The Opposition needs to rebrand into a new group that people will believe and entrust with power, the Leader of the Opposition (LOP) in Parliament Winfred Kiiza has said.

Speaking at the opening of a five-day workshop for selected Opposition leaders, held at the Nigeria National Assembly, Abuja, Kiiza (FDC, Kasese), said that the Opposition believed that they held lots of programmes and opportunities that Ugandans can believe in.

“We came here to gain skills that can enable us rebrand as the Opposition; so that people can believe that when they give us power, they know it has been given to the right people,” said Kiiza. The LOP led a delegation of MPs for the benchmarking workshop organized by the National Institute for Legislative Studies.

The MPs serve on the accountability committees of Public Accounts; Commission, Statutory Authorities and State Enterprises (COSASE); and Government Assurances and Implementation.

“We have realized that we need to re-brand; we need to work hard and ensure that many people believe in us by getting the message out to them about what we expect and plan to do when we take on power,” she added.

This is the second time in less than a year that members of the Opposition are benchmarking from West African countries, having been at the African Centre for Parliamentary Affairs in Ghana in March this year.

Kiiza said that the fact that the former Opposition parties are now in government in Ghana and Nigeria has energized the Ugandan Opposition and showed that the same could happen in Uganda. She added that it was difficult being in the Opposition in Uganda, as the Presidency remained very powerful, and the laws in place, including the Public Order Management Act prevented the Opposition from organizing and talking to the people.

Presenting a paper on ‘Opposition Party and Discipline in the Legislature,’ the Senate Chief Whip, Prof. Olusola Adeyeye, cautioned Opposition MPs against exposing politicians with the aim of embarrassing them.

“When you embarrass someone, you may damage a good person that you may need to push for an agenda intended to move the country forward,” said Sen. Adeyeye adding that “There are good people and bad people in every political party.”

The Leader of House of Representatives in Nigeria, Hon. Femi Gbajabiamila, warned the Opposition to avoid opposing government for the sake of “scoring cheap political points,” which would alienate the public.

“Today people are less concerned with partisan politics that bring no dividends and more interested in politics of compromise,” Gbajabiamila emphasized