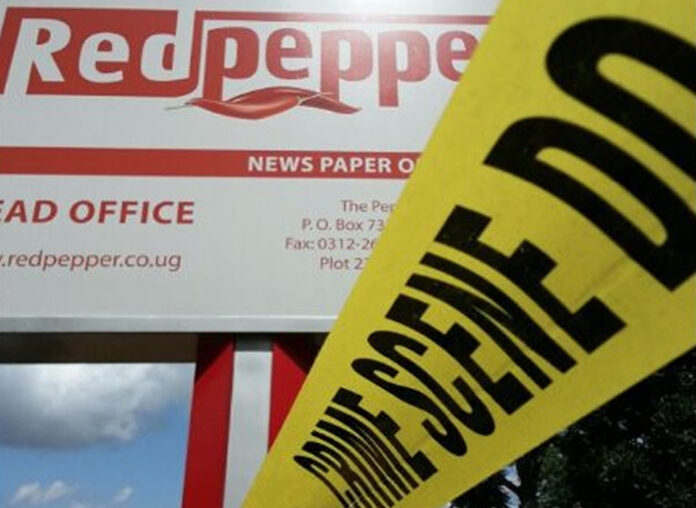 Another journalists’ body in Uganda has come up to condemn the continued; siege at Red Pepper publication premises and unwarranted arrest of some of its senior staffs.

The Uganda Press Freedom Network; a loose grouping of journalists from across all media houses who strive to enhance freedom of the press, has also thrown their weight behind other Human Rights entities including foreign embassies to condemn government for what has since been described as suffocating free press in Uganda.

In their Friday press statement, the forum of like-minded journalists faulted government for arbitrarily violating the set laws to concoct several ungrounded charges against media practitioners, who would ordinarily hold the duty bearers accountable of the actions. The press release reads in full;

Something unprecedented in the history of media repression in Uganda is happening to Pepper Publications Ltd, the publishers of Red Pepper and affiliated media platforms.

Managing Editor Ben Byarabaha, News Editor Francis Tumusiime and Deputy, News Editor Richard Kintu are also incarcerated. Over the years, Ugandan journalists have faced criminal charges for doing their work, a reprehensible act to which we will return later. What is without precedent, however, is bringing criminal charges against non-editors.

Why, for instance, would an accountant be held criminally liable for editorial decisions, which are made in another department? This threatens editorial independence within newsrooms as other executives –managing directors, finance managers or advertising managers – could now seek a direct role in making editorial decisions. They could argue that now that they are at risk of facing criminal charges due to the stories we get published, they would rather participate in making the editorial decisions to mitigate the risk.

This would inevitably lead to more self-censorship and detrimentally affect the quality of our journalism.

We consider journalism a public good, and the public interest is best served when the media is free to speak truth to power and probe the dealings of especially public officials. Public officials who have something to hide and do not want to account to the public will inevitably fear the media and seek to gag it. We are afraid that the State has been slowly but steadily eating into the space for the media to operate freely.

If we keep with the Red Pepper case, the State accuses the media house of publishing information prejudicial to national security, and in so doing “disturbing the peace” of some top officials including the President. The story in issue was published on November 20, 2017, entitled “M7 plotting to overthrow Kagame –Rwanda”.

The police speedily acquired what it said is a search warrant from a court of law and proceeded to seal off the premises of Pepper Publications Ltd. Red Pepper, its sister publications and radio stations have been out of operation since November 21 as a result of the raid.

Red Pepper employees who witnessed the police “search” on the premises say the operatives went about their business with what appeared like malice aforethought, tearing through servers and tampering with the printer in such a way that it would be hard for Red Pepper to be produced again anytime soon. Computers and other gadgets were taken away during the “search”. Without prejudice to the cases that have since been brought against Red Pepper managers and editors, we take exception to the manner in which this matter has been handled.

Ordinarily the state should have required the editor, and not every manager at the company, to answer whatever questions they had to raise. And whatever questions the State needed to put to the editor over the matter, there was no need for anyone to be arrested and illegally held in a high security detention centre even beyond the legally permissible 48 hours before being produced in court.

We heavily worry about the range of criminal cases that journalists, artistes and other citizens have faced in the recent past. One such charge is “disturbing the peace” of an individual. Editors from New

Vision, Daily Monitor, Red Pepper and the online platform Investigator have faced this charge in recent months. On Tuesday this week, an artiste and his producer were charged with “disturbing the peace” of President Museveni and remanded to Luzira prison.

Take the charge of “disturbing the peace” of police chief Kale Kayihura, for instance, which has been brought against several editors. If Mr Kayihura is annoyed over a story, he may direct his subordinates to summon the concerned editor for interrogation over “disturbing” his peace. We find this most absurd. To add to this are new criminal charges under the Computer Misuse Act, for instance, which also threaten our journalism and the wider freedom of expression of all citizens. In this regard, the charge of “offensive communication” has come up against a number of people already.

We fear that the gains that came with the striking down by the courts of law of charge of false news and sedition have since been wiped out. Also, criminal defamation remains on our Penal Code despite a ruling by the African Court of Justice that the offense violates freedom of expression as guaranteed in the African Charter on Human and Peoples Rights.

With this background, we argue that the attack on Red Pepper is a direct affront on press freedom. It is an extension of the State’s efforts to suffocate media. Security operatives have in the recent past roughed up journalists in the course of doing their work, and the Uganda Communications Communication has continued to issue bans against programmes and individuals on radio and television stations, etc.

We note with sadness that our colleagues at Red Pepper did not get salary for the month of November because the company was shut down. They remain unsure whether they will operate again. This is particularly absurd given the tough economic situation currently obtaining in the country, which has led to runaway unemployment. We insist that the search warrant the police say they acquired did not permit them to shut down Red Pepper.

Red Pepper, but as a warning to other media houses of what may befall them if they publish what those who hold power do not want to be published. This is reprehensible censorship.

We, of course, do not argue that media practitioners cannot break the law. Whoever feels aggrieved by a publication has a number of more civilised ways of handling the issue – by seeking civil remedies on their own.

Journalism must be de-criminalised, but even in instances where a criminal charge may be tenable as it is under our current legal regime – which we feel must change– the due process of the law must be followed.

In light of this, we take particular exception to the court’s failure to resolve the bail

application by the eight Red Pepper managers, who on Tuesday were sent back to Luzira prison for a further 14 days until December 18.

So we urge the police, the Uganda Communications Communication, the Directorate of Public Prosecutions which sanctions charges and in this case the courts of law to which these matters are eventually referred, to act judiciously. We also call on resident Museveni to jealously guard the little steps that Uganda has made on the democratization journey over the years.