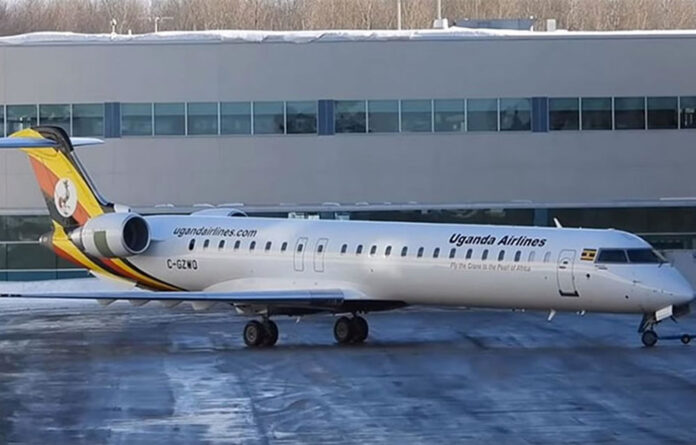 KAMPALA: Much as Ugandans are happy waiting for the return of Uganda Airlines into the skies, the bad news is that the revamped airline is 99.9 percent privately owned by unnamed individuals – with government owning just an insignificant 0.0001 percent of the airline’s shares, something that yesterday shocked members of parliament.

This revelation was disclosed by opposition MPs on the Budget committee who wrote a minority report following the approval of a Shs 280 billion supplementary budget for the purchase of the first two Bombardier planes from Canada. MPs were shocked to learn that an individual took out a patent on the Uganda Airlines company name.

In June 2016, President Museveni told his cabinet in his first address that Uganda Airlines was to fly again because lack of a national airline is a ‘big shame.’ Then in 2017, the minister of state for Transport, Aggrey Bagiire, told the media that who owns the name was not a problem at all.

“It’s true the name was registered by someone [who] I also do not know. It’s true the name was used in the Uganda Registration Services Bureau, but what is important is the revival of the national carrier, which we are working on,” said Bagiire then.
“The most important thing is that we shall get another name, which will show the planes are for Uganda,” he said at the time.

Now, in his report to parliament yesterday, Budget committee chairperson Amos Lugoloobi said, that considering the urgency associated with the procurement of the two bombardier planes, his committee took a decision to prepare and present a separate report for the items while still in the process of scrutinizing other items on the total Shs 770.2 billion supplementary budget presented by government earlier this month.

Among the approved expenditure of the multi-billion supplementary budget, were the Shs 280 billion for the purchase of the planes and the Shs12 billion for the payment of ground rent arrears to Kampala Archdiocese for the land leased to Uganda Police Force at Nsambya police barracks.

Lugoloobi said the approved supplementary expenditures for the aircraft and the Archdiocese shall be financed through the additional revenue release in the FY 2018/2019 and proceeds from the anticipated US$60 MTN license renewal fees payment and capital gains tax resulting from the sale of Tullow Oil’s assets to Total E&P Uganda at US$15 million.

Lugoloobi justified the approval of Shs280 billion for Uganda Airlines, saying failure to pay, would result in severe penalties and damages against Uganda. Ministry of Works and Transport has been putting enormous pressure on parliament to approve the Shs 280 billion supplementary budget for the purchase of the planes, arguing that Uganda has already defaulted on its payment schedule.

Last year, Uganda ordered for four CRJ900 regional jets with Bombardier Commercial Aircraft, as part of the much-anticipated plan for the revival of Uganda Airlines. The first jets were supposed to have been delivered in January and February this year, but government kept pushing forward the arrival time.

During her interactions with the Budget Committee last week, Works and Transport minister Monica Ntege Azuba, said the funds for the purchase ought to be availed as soon as possible because any further delays means that Uganda will have to incur costs of insurance and parking fees as the planes lie idle with the manufacturer.

Azuba warned that the required Shs 280 billion has to be made within the next 6 days by March 29 or else the manufacturer will push Uganda’s aircraft orders aside to 2022.
Two opposition MPs authored a minority report, appealing to parliament to reject the approved supplementary budget requests. Kasese Woman MP Winfred Kiiza and Lira Woman MP Joy Atim Ongom informed parliament of a number of irregularities that need to be addressed before the supplementary can be approved.

Ongom demanded that government first tables before parliament, proof regarding ownership of Uganda Airlines as well as amending the MoU for government to be allocated majority shares that can be later floated to the public.

“The share capital of Uganda National Airlines Company Limited is 200 million divided into 2 million shares. Of the 2 million shares, only 2 shares worth Shs 200 to minister of Works and Transport as well as ministry of Finance. This makes both ministries to be minority shareholders holding only 0.0001% of the shares. At the moment the owners of the 99.9% shares are unknown. The owners will only be determined when the directors decide to allocate the shores. It was asserted that the majority shares will be floated to the public,” said Ongom.

She also questioned the appointment of Secretary to the Treasury Keith Muhakanizi and Bageya Waiswa as directors of Uganda National Airlines Limited in their individual capacity. Ongom further said that it would be illegal to utilise the funds from the MTN licence to finance the airlines and that it was not permissible to utilise funds that are ideally reserved for an underfunded sector.

The deputy speaker, Jacob Oulanyah adjourned debate on both reports to Wednesday, which is today.