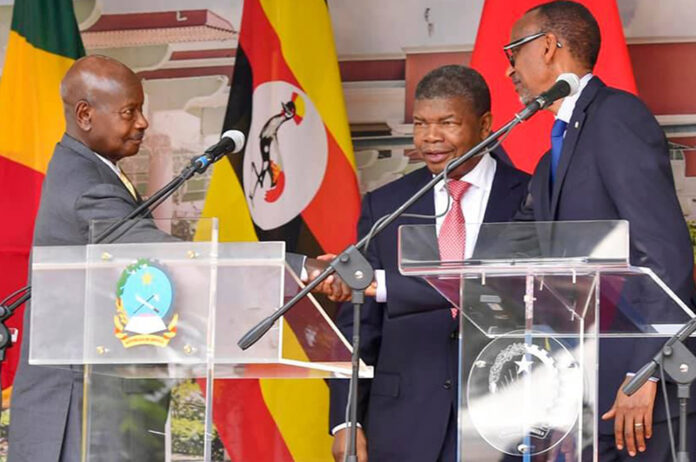 Counterparts Yoweri Museveni Kaguta (Uganda) and Rwandan Paul Kagame on Wednesday met in the Angolan capital, Luanda to sign a memorandum of understanding that would eventually put an end the bickering that has been widely documented between the two close allies. The two gentlemen finally shaked hands after the pact in Angolan capital-Luanda.

This was after a meeting chaired by Angolan President Joao Lourenco on Wednesday in Luanda and also attended by the Congolese President Felix Tshisekedi.

“Together with President Paul Kagame, we signed an agreement to improve the political and economic relations between our countries,” Museveni said after the meeting.

“We have agreed on a raft of issues that will be implemented between our two countries, largely meant to improve our security, trade, and political relations. Uganda is fully committed to enforcing this agreement.”

Rwandans Kagame also attested to the deal. “We had the opportunity to broadly and extensively discuss many issues as we understood them that underlined this problem, hence the Memorandum of Understanding we have reached today which stipulates the path to follow as we continue to try to resolve this problem,”Kagame said.

The deal drew down the curtain to a long period of deep hostility between the two neighboring Presidents Museveni and Kagame who were once close allies with the pair making allegations of espionage, political assassinations and meddling against each other.

Termed as the “Memorandum of Understanding of Luanda” had alot in its body as thus.

In the deal, both heads of state agreed to respect the sovereignty of each other and that of their neighbouring countries.

“Refrain from activities conducive to destabilization or subversion in the territory of the other party and neighbouring countries, thereby eliminating all factors that may create such perception, as well as that acts such as financing, training and infiltration of destabilizing forces,” the parties agreed.

Prior to the deal, Rwanda had publicly accused Uganda of abducting its citizens and supporting rebels led by bent on overthrowing the government.

“RNC and FDLR work from Uganda with support of some authorities there. This is another serious case and we have raised it with them,”Sezibera told a news conference in Kigali in March.

Museveni in a letter to the Kigali establishment admitted having met but not endorsing some of the rebels.

The Kampala establishment totally denied accusations of training and facilitating the anti-Kigali forces.

“Uganda cannot allow anyone threatening a neighbour to operate from its territory,” he said.

Rights and Freedoms
The leaders of the Kigali and Kampala establishments, through the memorandum of understanding agreed to protect and respect the rights and freedoms of the nationals of each other party residing or transiting in their national territories in accordance with the laws of that country.

These arose out of accusations that Uganda, through the Chieftaincy of Military Intelligence, the UPDF’s intelligence arm had arrested Rwandans and detained them.

“There are more than 40 Rwandan citizens languishing in cells of Uganda’s Chieftaincy of Military Intelligence and more than 800 Rwandans who were deported from or refused entry to Uganda since January 2018”,he stated.

However, in response, the Uganda government spokesperson, Ofwono Opondo denied the accusations saying non-Rwandan citizen is detained in Uganda illegally.

“There’s no witch hunt for Rwandese in Uganda. There’s also nobody from Rwanda being held by the Ugandan authorities for any reason. We would like to send a clear message to Rwanda that there’s no one Uganda is harassing from Rwanda or has in custody,”Opondo said.

The Kampala establishment, however, noted that all Rwandan citizens arrested had been accused of a number of offences which among other included being involved in the repatriation of their fellow citizen to Rwanda and had been arraigned before the army court.

“Any Rwandan in custody has been processed through the police system or judicial system.”

The deal signed on Wednesday underscored the need to respect the rights and freedoms of each other’s nationals transiting in their territories in accordance with the laws of that country.

Rwanda-Uganda border
The two Presidents agreed to open the Rwanda- Uganda border, which has been a big issue of concern between citizens of both countries.

“Resume as soon as possible the cross-border activities between both countries including the movement of persons and goods for the development and improvement of the lives of their populations,” the agreement read in part.

The cold relations between the two formerly close Presidents Museveni and Kagame climaxed early this year when Rwanda closed its border with Uganda.

At first, Rwanda claimed there were ongoing works on the border but it later turned out to be false as the border had been closed.

Speaking at a retreat of national leaders, Paul Kagame, the Rwanda president said his country had been “provoked” by Uganda that prompted them to close the Katuna border.

After the border closure, Rwanda also blocked her citizens from travelling to Uganda for fear of being arrested, a move which stalled trade between the countries.

The closure also saw Rwandan citizens denied food and other services that they always got from Uganda but also their Ugandan counterparts who had been selling to those from Rwanda were denied the right to free trade.

In response, the Ugandan government accused their Rwandan counterparts of putting an embargo on goods entering Uganda.

“What is happening on the ground is that export of Ugandan goods to Rwanda has been prohibited by Rwandan authorities. The same authorities are only allowing crossing into Rwanda, those trucks carrying transit goods destined for Rwanda or transiting through Rwanda to the Democratic Republic of Congo and other places,”Kutesa said in a statement.

“Goods from Rwanda and Rwanda registered trucks are not being allowed to cross over from Rwanda to Uganda by the Rwandan authorities.”

However, after the deal signed in Luanda, both countries pledged to end this impasse which had seen cross border trade stall by opening their borders.

In the agreement, it was also agreed that both government put in place an adhoc committee for the implementation of the agreement led by their respective foreign affairs ministers.

“The committee will also be composed of the Ministers responsible for internal administration and heads of intelligence of both countries,” the agreement read.

The two Presidents and their respective governments were warned that they would be held accountable in case of non-compliance to the articles of the memorandum of understanding.

“The memorandum of understanding shall enter into force immediately upon signature.”