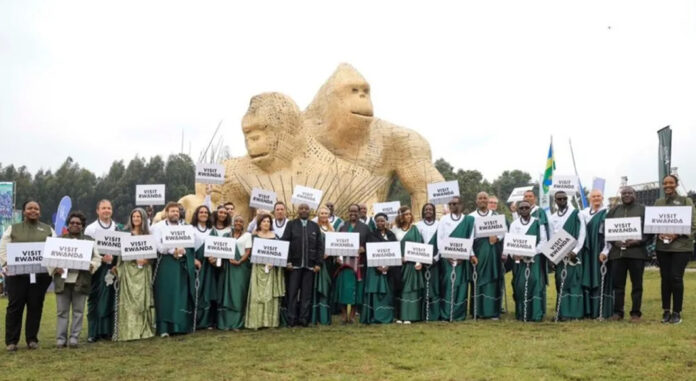 Twenty mountain gorillas from the Volcanoes National Park Rwanda have been named during the annual gorilla naming ceremony known as Kwita Izina.

The ceremony has been held at Kinigi on 2nd September 2022. The 18th edition of the Kwita Izina has been embraced by public figures, and the British Royalty, Prince Charles has been the been the chief namer.

Since the inception of Kwita Izina in 2005, 354 mountain gorillas have been named.

Prince Charles of the British Monarchy attended the ceremony virtually and was among the few chosen dignitaries that got the opportunity to give a baby gorilla a name.

“The baby I will be naming is a male baby gorilla born on the 29th of April, 2022, from the Umuhoza family to its mother, Agasaro . The name I give him is Ubwuzuzanye which means harmony”, Prince Charles said.

Other popular names include Loise Mushikiwabo, the secretary general of Francophonie. He named her baby gorilla Turikumwe which means “We are together”.

This baby was born on 29 April 2022 to Agasaro of the Muhoza family of mountain gorillas and was named by His Royal Highness The Prince of Wales.

The baby was born on 15 September 2021 to Ubuntu of the Igisha family. The baby was given a name by international football referee Salima Mukansanga.

This male baby gorilla was born on 21 January 2022 and was named by Stewart Maginnis, the Deputy Director General of the International Union for the Conservation of Nature (IUCN).

Akamaro’s daughter from the Kureba family of mountain gorillas was born on 12 October 2021 and was named by Professional Racing Driver and Presenter, Naomi Schiff.

From Pablo Family, the baby was born on 9 December 2021 and was given a name by Sir Ian Clark Wood, KT, GBE, Chairman of The Wood Foundation.

Named after the Chairman of the Rwanda Development Board, Itzhak Fisher’s Father-in-Law, a Holocaust survivor who was called Leo, which means lion, this male baby gorilla was born on 1 August 2022 and is a new member of the Hirwa family.

This name was given to Nsanganira’s son of the Ntambara family of mountain gorillas by Philanthropist and Entrepreneur, Dr. Cindy Descalzi Pereira.

Umutuzo’s son that was born in May this year was given this name by legendary Senegalese musician, Youssou N’Dour.

Umwe’s daughter from the Noheli family was given this name by Paris Saint-Germain football legend, Juan Pablo Sorin. She was born on 13 December 2021.

This name was given to Igitangaza’s daughter of the Mutobo group of mountain gorillas by the Chief Executive Officer of the African Wildlife Foundation, Kaddu Sebunya. The baby gorilla was born on 13 September 2021.

The Secretary General of La Francophonie, Louise Mushikiwabo,named the newborn baby gorilla from the Ntambara family.

Veterinarian and Television Presenter, Dr Evan Antin gave this name to a baby mountain gorilla from the Susa family.

This name was given to Ubufantanye’s daughter from the Musilikare family of mountain gorillas born on 15 August 2021 in Volcanoes National Park. The baby was named by Neri Bukspan, the Managing Director of Standard & Poor’s Credit Market Service.

Laurene Powell Jobs, Founder and President of Emerson Collective gave this name to Umwari’s baby gorilla from the Susa family in honour of the late Dr Paul Farmer.

Founder and President of Luntz Global, Dr. Frank Luntz gave this name to a male baby gorilla from the Susa family.

This name was given to Umuco’s daughter who was born on 4 August 2021. The baby was named by the American actor, Uzo Aduba.

With the growing need to expand the mountain gorilla habitat through the Volcanoes National Park Expansion Programme, this name was given to a male baby gorilla born on 12 October 2021 by Moses Turahirwa, Creative Director of Rwandan fashion brand, Moshions.

Football legend Didier Drogba gave this name to a male baby gorilla that was born on 28 July 2022 to Twiyubake, a member of the Muhoza family of mountain gorillas living in Volcanoes National Park.