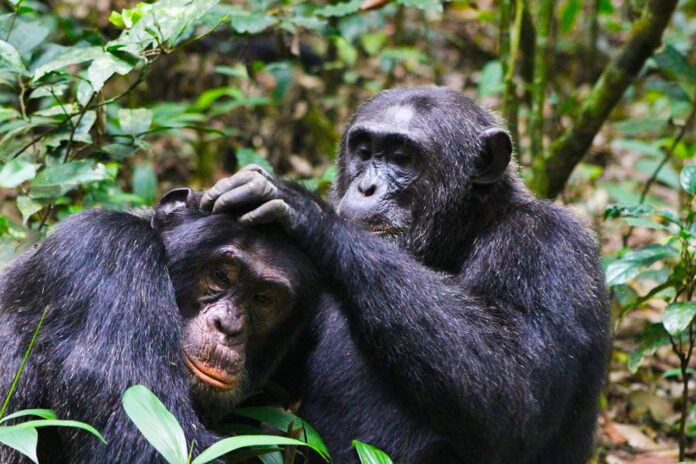 Both primates and nature enthusiasts will find heaven at Kibale National Park. The park is situated in western Uganda, close to the districts of Fort Portal, Kyegegwa, and Kamwenge. Astonishingly diverse primates, animals, and bird species may be found in Kibale National Park, which also offers fantastic nature trails for park visitors. The park’s proximity to numerous other must-see sights is what thrills visitors.

When it comes to chimpanzee tracking, Kibale Forest National Park is the best place to go. Similar to gorilla trekking in Bwindi Impenetrable National Park and Mgahinga National Park, you can go chimpanzee trekking and habituation in Kibale Forest at the same time, however, habituation takes a lot of time and concentration. Chimpanzees are the main attraction in this park. It costs $200 and $250 to go chimpanzee trekking in Kibale Forest National Park. A briefing always precedes a small-group tracking trip with a qualified ranger guide to see these wonderful animals in their native habitat. Once you locate a group of these obstinate and active primates who like to live in trees, you are permitted to spend an hour observing their actions and recording them with photos and videos for your historical record and memory keeping.

2. The bird watching is hilarious

One of the main activities of Kibale National Park, which has since been dubbed the “birder’s refuge,” is birding. More than 350 different bird species can be found there, of which 6 are indigenous to the area. During forest and nature hikes to the forest and at the Bigodi wetland, one can see these lovely rare bird species. Although it can be done throughout the year, the optimum months are from March to May and from September to November. Food and fruit are more plentiful in the forest during this time, luring more birds to dine on them.

3. The nature walks and hikes

In Kibale Forest National Park, there are numerous and magnificent nature trails, but some are seasonally designed. You may enjoy and explore a wide range of attractions, including vegetation like the tropical rainforest, riverine forest, swamplands, and grasslands, as well as other animal species, like the antelopes, elephants, and several primate species that live in the park.

Kibale national park is the place to go if you enjoy seeing primates. More primate species than any other national park in Uganda can be found there, with 12 in total. I’m going to present them to you, and if we were betting, I’d wager that you haven’t heard of them before. They are as follows: 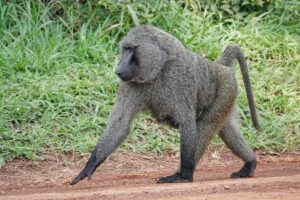 These monkeys need to be handled gently and given room because they are the most destructive of all species. They use vocalizations to communicate, such as furrowing their brows or showing their jaws in an aggressive manner. They are omnivores with a varied and opportunistic diet who may live in a variety of settings, including those along the coast. They are able to consume anything they come upon, including young birds, frogs, grasses, fruits, seeds, and a variety of other things. 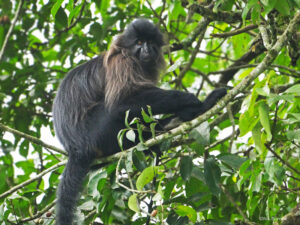 There is only a limited portion of Uganda where gray-cheeked mangabeys can be found. Experts can’t clearly spend a lot of time on the ground because their numbers are unknown.

Their thick, almost-black brown fur and light gold mane around their neck make them look like a little, hairy baboons. The only significant difference between the female and the male is that the females are smaller. 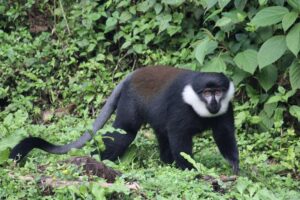 These are a time called mountain monkeys, they have tails that can grow as lengthy as 80cm. the white beard is a dead giveaway that you have seen a L’Hoest’s monkey all through your walks. They are most active in the morning and in the course of the afternoon hours and are usually observed on the ground foraging for food. When threatened from the ground, they flee to the trees to get away from the threat and flee from the trees when threatened by the eagles to the ground.

These stunning monkeys can be identified by the white fur that is present at the tip of their tails. The name “colobus” is derived from the Greek word “Kolobos,” which describes a thumb that resembles a stump. When these monkeys are reunited with people they know, they engage in a ritual that may include embracing. 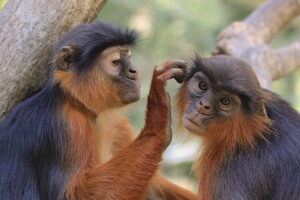 These individuals are classified as vegetarians because they exclusively eat leaves, flowers, and fruits. The giant apes prey on these red colobus monkeys surprisingly frequently (the chimpanzees). When they are assaulted, the group comes together to defend itself while the young ones and females attempt to flee. 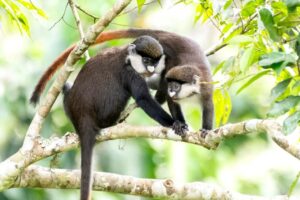 There are other names for the red-tailed monkey that you can use, including Schmidt’s guenon, black-cheeked white-nosed monkey, and red-tailed guenon. Overall, the tail of this particular monkey is a sure sign when it comes to identification. The tail can develop and expand to a maximum length of 35 inches, or 90 cm. 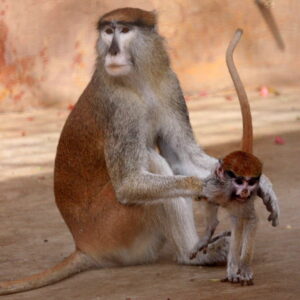 Since they spend most of their time on the ground, the Patas monkeys are simple to find in Uganda. They stand out from the other monkey species thanks to their strikingly colored skin. Patas monkeys are swift; they can run at speeds of up to 55 km/h. The most astounding and distinctive characteristic of Patas monkeys is that they just place their fingertips on the ground when they walk, rather than their entire hand. 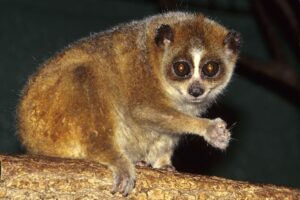 A type of nocturnal primate known as the potto monkey prefers to reside in tree branches. The potto has small, round ears and is between 30 and 50 cm long. In contrast to other species, it has a short, 5-cm tail. Each of its feet has a toe that resembles a claw, which is horrifying to look at but quite useful for grooming. This primate is rarely visible during a daytime trip through the jungle; instead, it is exclusively visible at night. 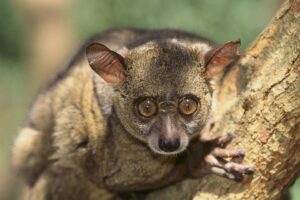 This is a different kind of primate that lives in Kibale Forest National Park. The smaller Galago (also known as the bushbaby) is a nocturnal monkey that resembles the potto in length and appearance, however, it has a longer, fluffier tail and larger ears. They are most likely to be sighted at night and less often on daytime hikes.

These are the most common monkeys in Africa, and they have dark faces with a white stripe running across them. Do not wave your food in front of the vervet monkeys since they are not timid and will steal it from you. 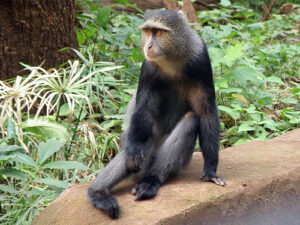 A wide-faced, white forehead banded primate with a skull that is darkly pigmented is known as a “blue monkey.” The name’s reference to “blue” is a little deceptive because its fur only occasionally exhibits a bluish quality. The body of the blue monkey is covered in little black and white dots. Due to the red-tailed monkeys’ ability to protect them, they frequently congregate with them. The two species will also groom one another.

5. Its closeness to epic destinations

The wetlands of this sanctuary, which is close to the nearby Kibale National Park, are home to a variety of creatures, including primates, and serve as a habitat for several bird species. Bushbucks, otters, bush pigs, mongooses, and sitatungas are just a few of the forest creatures you might see on a nature walk to the sanctuary. There are also about 200 different bird species, not to mention a shoebill stork that was observed in the papyrus of Bigodi Swamp.

Semuliki National Park is only a few kilometers away from Kibale Forest National Park. You should visit this park if you enjoy adventure and birds because it is home to a variety of Uganda kobs as well as other mammals including elephants, leopards, and others. The park’s 420 different species of birds have earned it the moniker “real birders’ haven.” The Sempaya hot springs, which are located nearby and have male and female hot springs that are appealing to tourists, are the most well-known feature that unites this park.

The most popular safari destination in the world is Queen Elizabeth National Park, where you can go on game drives and see fantastic safari animals like leopards, lions, antelopes, giraffes, and buffaloes as well as aquatic mammals like crocodiles, hippos, and other reptiles while taking a boat cruise to the Kazinga channel.

The Bwindi Impenetrable National Park, where people go gorilla trekking, is not very far from the Kibale forest, where you are. The highlight of our vacation to Uganda is going to see the gorillas, and we haven’t met anyone who doesn’t absolutely love this amazing experience.

We offer adventure packages to all of these exciting top destinations, if you find our article interesting please don’t hesitate to drop your inquiry and look at some of our sample itineraries to know more about the Uganda safaris and we would be able to tailor a trip of your choice to meet your exact taste of preference.