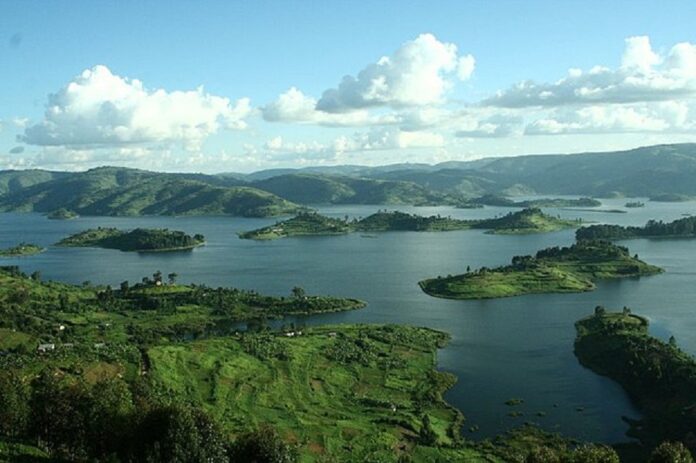 A stunning and beautiful lake also known as the place for little birds is Uganda’s deepest lake and second in east Africa. Lake Bunyonyi is a unique lake in the country very small but with interesting stories, the best destination for birders, beautiful accommodations, and unique and interesting culture.

Lake Buyonyi measures about the depth of 44m-900m situated 1962 m above sea level and have an area size of 24 km long and 8 km wide. With about 29 islands located within the middle of the lake taking various shapes and sizes, endowed with evergreen vegetation are used for the construction of lodges, settlements, and docking of boats.

Located in the hilly districts of Kabale and Kisoro, Lake Bunyonyi is surrounded by hills measuring about 2200m and 2470 m above sea level which are used for settlements, and farming, among other things.

The famous islands on Lake Bunyonyi

Lake Bunyonyi is the most appealing and exciting lake in Uganda discovered in the southwestern place and is among the Major visitor locations in Uganda. Lake Bunyonyi is popular for its 29 islands that are special and are notably contributed to the serenity of the lake, however, of all the 29 islands, there are predominant 5 islands that are in many instances visited, and these include;

On Lake Bunyonyi, there is the well-known Akampene Island popularly known as the punishing grounds for females who would get pregnant before marriage in the community. A girl would be taken to Akampene island and abandoned there to starve to the demise or drown whilst making an attempt to swim to return to the predominant island due truth that Bunyonyi is the deepest lake. Alternatively, they would be saved via fishermen who would no longer come up with the money to pay dowry. However, in the 1940s the practice used to be criticized with the aid of church missionaries and abolished within the neighborhood even though some parents’ victims had been against it. The Akampene Island is a must-visit while on a Uganda safari on Lake Bunyonyi to ride extra about the islands.

This is the biggest island on Lake Bunyonyi different than Akampene Island. It is one of the islands that host human beings and their settlements and it is most popular for having the leprosy cure center. The leprosy sanctuary was once constructed in 1930 with the aid of a Scottish missionary as a clinic to deal with people with leprosy disorder to curb away the stigma of the non-suffers, however, the therapy core no longer exists even though the structures are nevertheless there working as a college facility.

This is one of the islands on Lake Bunyonyi with people’s settlements but it is most famous for wildlife animals such as antelopes, impalas, bushbucks, and many others that opt for living on this island. Travelers to Lake Bunyonyi can request a flora and fauna tour on this island however it is generally guided so better make inquiries with your operator for game viewing specifications on the island.

The island is well-known for the mysterious story of a woman cursing the island and it grew to become upside down. It is believed that the island is upside down due to an ancient lady who cursed it long in the past after asking for some men who have been brewing local wine “Obushera” to give her to drink and they refused. In an acceptance to chess away the old woman, they provided her a journey to the mainland and she accepted. When the woman reached the mainland, she cursed the island, it became upside down and burn all the guys that had been on the island. This story makes the island popular attracting a lot of vacationers to see what was remaining stated in the delusion history.

Why You Should Explore Lake Bunyonyi 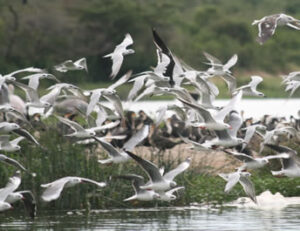 Many travelers undertake gorilla trekking in Uganda and Rwanda come to experience the relaxation and calmness at the lake while enjoying the best attractions and wonderful scenery, they involve in various community activities as well as other activities involved at the lake.

Lake Bunyonyi is the home to over 200 bird species which makes it a paradise for birders, the reason Lake Bunyonyi is known as a place of little birds. The islands of Lake Bunyonyi contain swampy vegetation which acts as a habitat for birds, for example, the Nyombi swamp where the most number of birds are spotted. birds mostly spotted are grey–crowned crested crane, red chested sunbirds,  swamp flycatcher, egrets, Woodpecker, Raptors, African kingfisher, ibis, black herons sunbirds among other birds.

Swimming: Swimming is among the activities tourist can enjoy while at Lake Bunyonyi. The lake is one of few lakes suitable and safe for swimming as it is bilharzia free and has no predictors like crocodiles and Hippos. Important to note Lake Bunyonyi is among the deepest lake in Africa, swimming should be done by an experienced swimmer or under the supervision of an experienced swimmer.

Nature walks and biking: Biking can be done on trails exposing you to unique African thrilling countryside. Walks can also be done around lake shores in the neighboring local communities as you explore flora and fauna with the great view of the scenic lake coupled with seeing some birds.

Cultural encounters: The Bakiga tribe originally inhibits tats of the islands of lake Bunyonyi however currently, there are two tribes dwelling there Bakiga and the Batwa. Bakiga are recognized for their challenging work and cultivation skills as their cultural value, Batwa migrated to the island after they had been evicted from Bwindi impenetrable and Mgahinga countrywide park when the forests had been gazette as National parks. Batwa used the forest for survival it’s the place they ought to get food and meat with the aid of looking at animals and harvesting honey. It’s said and believed that the Batwa lived in the forest for over five hundred years.

Canoeing and boat cruising: Boat cruising and canoeing can also be conducted on lake bunyonyi as you explore the panoramic lake, canoeing, and boat cruising can be done at any time even during the night. You can visit various islands and know more about them and see some of the water birds.

Lake Bunyonyi has positioned in Kabale district approximately 400 km from the capital city Kampala and can without difficulty be reached by road on Kampala –Kabale toll road approximately an 8-hour drive from Kampala to Kabale city and 8 km from Kabale town to lake Bunyonyi just half hour drive. 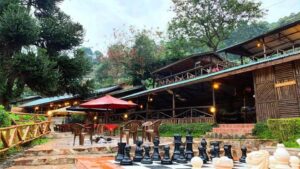 Lake Bunyonyi has several lodges, hotels, and camps where you can sleep depending on your choice of budget. Some beautiful lodges include;

Lake Bunyonyi Rock Resort: Positioned exactly on the shores of Lake Bunyonyi, Bunyonyi rock resort will give you a memorable comfortable experience, affordable and eco-friendly, and the best lodge to stay on while on safari in Mgahinga National Park and Bwindi Impenetrable National Park.

Lake Bunyonyi rock resort offers local and inter-continental dishes, a restaurant, a bar, and 22 rooms, 19 of the rooms are luxury, self-contained with hot water and the three are midrange not self-contained. Besides accommodation services, lake Bunyonyi also offers services like boat cruises, swimming, and mountain hiking.

Birdnest Lodge: Birdnest is located in the southern part of Uganda on the shores of Lake Bunyonyi about 30 km from kabala town to the accommodation.

Bunyonyi overland camp: Bunyonyi overland camp is positioned at the shores of Lake Bunyonyi offering you a platform to see the deepest lake and its islands. The place offers the best place for birding, nature walks, community visits, canoeing, and mountain hiking. The facility offers a beautiful midrange room, bar, restaurant both local and intercontinental dishes, and camps.

All lodging facilities offer each nearby continental dishes, restaurants, bars, extremely good and relaxed beds, and tenting sites. Lake Bunyonyi is a great location for relation after tiresome gorilla trekking in Bwindi and Mgahinga National Parks.