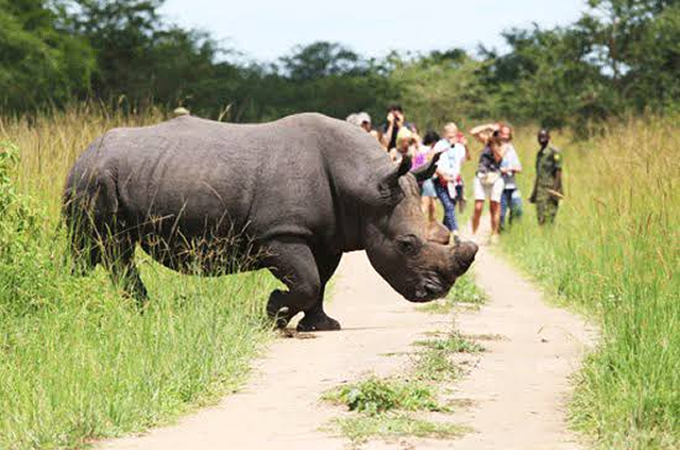 Uganda’s dream to reintroduce the rhinoceros into its wild spaces after several decades is taking a good course as the breeding program releases more new individuals than expected, within a shorter period of time.

In Uganda currently, there are no rhinos left in the wild after they were depleted in the early 1980’s because of poaching for the illegal trade in their horns.

It is estimated that more than 700 northern white rhinos and eastern black rhinos once roamed Uganda before being completely eradicated in the country around 1983.

The rhino is considered one of the African ‘Big Five’. Africa has two subspecies – the black rhino, which is on the IUCN Red List as critically endangered, and the white rhino, which is listed as ‘near-threatened’.

But Uganda’s Ziwa Rhino Sanctuary which started in 2005, with three objectives of importing a few white rhinos back into the country, breeding them and eventually reintroducing them into the Ugandan wild, is proving successful as the number of individuals continue to grow.

According to Mr Opio Patrick, a Uganda Wildlife Authority (UWA) ranger and guide attached to the sanctuary, the rhinos will first be introduced into the expansive Murchison Falls National Park after a feasibility study conducted and finalised last year found that it was an ideal environment.

The plan is to introduce them into 11 protected areas across the country.

“From the six rhinos that we brought in here previously, we have now raised up to 33 rhinos. The next target is to raise up to forty or fifty and then transfer them,” Opio said during a recent trip to the sanctuary.

Located in Nakasongola District, about 164km north of Kampala, the Sanctuary, a private not for profit animal centre is the only place in the country where one can see white rhinos in their natural habitat, while walking on foot.

It covers an area of 7,000 hectares and, from 2005 when it started full operations with about just six white rhinos, four of them imported from Kenya and the other two from the USA, there has been tremendous progress that has seen the number of animals increase to the current 33 Southern White Rhinos.

At its inception, the plan to breed these rhinos for reintroduction into the wild was projected to take up to between 20 to 30 years.

The authorities here say the breeding will continue as some of the animals keep being transferred to different locations.

Visitors at the sanctuary normally experience an up-close view of the rhinos and their babies feeding on the grasslands or resting in the little shrubs dotted across the sanctuary.

But there is visibly a heavy presence of armed UWA rangers at each corner of the fenced sanctuary with Opio saying that this is to ensure the animals are protected 24 hours.

The rhinos remain under threat from poachers world over, especially for their prized horn.

Powdered rhino horn is used in traditional Asian medicine as a supposed cure for a range of health issues and illnesses, including fever and cancer. This is a major motivator for poaching, despite there being no evidence that rhino horn – which is made of the same substance as human fingernails, keratin – has any medicinal value.

At the sanctuary, the neighboring community has been sunk into the conservation efforts.

Many are allowed to graze their cows within the sanctuary after several safety precautions. The sanctuary management is also involved in corporate social responsibility for the community.

This article is reproduced here as part of the Space for Giants African Conservation Journalism Programme, supported by the major shareholder of ESI Media.