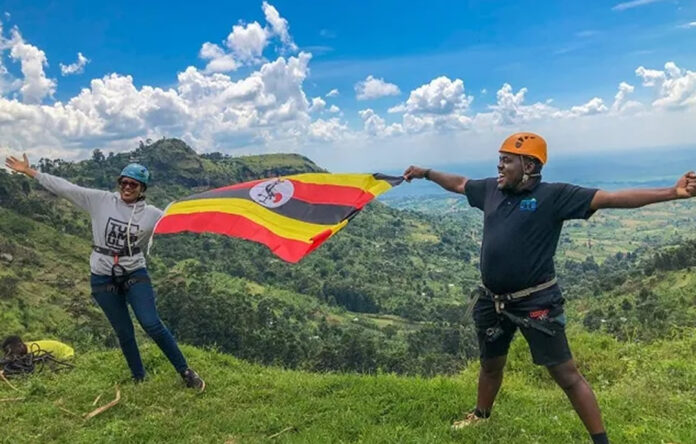 The biggest focus of tourism is in the Western Region that has more than three national parks and one of the most scaled mountain peaks in the Rwenzori National Park (The Mountains of The Moon) including gorilla trekking trails.

Uganda is the best location for bird watching in East Africa with over 1000 species found in areas like Mabira forest, Bwindi Impenetrable and more.

There’s a 90 day East African visa that can allow you to visit the rest of East Africa.
There are over 5 kingdoms in Uganda, with the Buganda and Tooro Kingdoms being the most popular. Uganda boasts of hundreds of cultural sites scattered all over the country, due to the different cultural variations.

Most famous high scaling mountains in Uganda are Rwenzori Mountains and Mount Elgon.
Uganda has over 11 National Parks and is the home to the source of the world’s longest river, the Nile.

Uganda was voted one of the happiest countries in the world by the United Nations’ World Happiness Report 2013. The country is also known for its safety as well as for its people’s hospitality.

According to a Quality of Life Survey 2016 done by Mercer, Kampala, the capital city of Uganda tops most East African cities as the best to live in. The judgement is done by examining social and economic conditions, terrorism threats, education, housing and health.

Outlook on the Ugandan Tourism Industry

What do you think about the Ugandan tourism sector currently?

The tourism sector improved a lot in the last 10 years; travellers visiting the country have doubled and the sector is becoming a key sector for the economy. Uganda has everything it takes to succeed and has become one of the most preferred destinations in Africa. Indeed several activities can be done in here including trekking, game driving, water sports, entertainment, etc.

Besides, the infrastructure (roads, electricity, internet coverage, etc.) are consistently improving. For a long time, this potential has not really been promoted fully, especially abroad; as the beauties of the country are still unknown to many travellers from around the world.

However, in the past few years; several serious actors like the Uganda Tourism Board (UTB), Uganda Hotel Owners’ Association (UHOA) and Uganda Wildlife Authority (UWA), have been working on improving and giving the country more visibility.

How is Jovago contributing to the Tourism Industry of Uganda?

Jovago aims to connect travelers and hotels through its platform and therefore make travelling in Uganda easier. The idea is to enable travelers to book more than six hundred hotels all over the country (from Kampala to up country, as far as Karamoja region), at every price range. Jovago has given a first online visibility to more than half of its hotel partners: more than 300 hundred hotels have been visible and bookable online for the first time with Jovago.

What would you recommend when it comes to changes that have to be made to improve the tourism sector?

Giving people more visibility for accommodation (in terms of offers, prices, etc.), something that Jovago is doing and I must say, so far we are making headway. It is also very important to advertise the potential of Uganda and show people that we are more than Gorilla trekking, that we have so much more to offer such as; hiking/mountaineering, water sports activities, bird watching, beautiful views of falls (Sipi Falls among many others) and activities that show how vibrant Uganda as a country is. Some countries are currently affected by a decrease in the number of tourists because of security reasons. However, though Uganda is very stable and has not had anything major affecting the day to day activities for decades, it still has very few visitors compared to its counterparts. We have a big role to play by letting people know that Uganda is completely safe and stable, a place where people can come to enjoy sights and sounds at affordable prices.

Insights on the Ugandan Hotel Industry

The Ugandan hospitality industry has grown vastly in the past few years, what do you think has led to this boom?

Tourism is a very sensitive industry and any little upheaval affects it. Over the last few years, there has been peace and security that has allowed investors to promote their businesses and for clients to come in without any hindrance. This has been as a result of waived taxes and other incentives from the government.

Do you see the industry getting even better?

The tourism sector is looking up in spite of the bumps now and then. Right now, the world is looking at Uganda as a real option. Only recently Kampala was voted the best city to be in East Africa ahead of Nairobi, Kigali, Dar es Salaam or Bujumbura. Now, that means a lot. That the world has such confidence in us is a great sign and a confirmation that we are doing things right.

Is E-commerce going to bring about a good change in the Tourism industry?

E-commerce is the transaction of business on the internet. This type of business is already benefitting a number of Ugandan tourism players as more and more firms begin taking on electronic payments. Tourists feel safer when they know they can make payments or book safaris using their credit / debit cards instead of moving around with cash, which is riskier. The number of businesses taking up this type of payment system is growing, bringing more and more into the global business circle. This will certainly increase our business because of the convenience and security it offers the travelers and businesses.

It has grown but I would say that it is still lagging behind. We were essentially starting from the back line with 30 years of war and we had to work our way back to our position as a premium tourist destination. In the last 15 years, we have grown by over 1,000 times but we are still not doing 10% of what is going to Kenya. Nevertheless, we are working hard to improve, especially to eliminate the challenges we are facing.
Uganda is a gem. Even without marketing, people always see Uganda as one of their favorite destinations in Africa and continue to come back and refer other people to the country. The Government is also peeking interest and you find many wanting to invest.

What major hurdles is the hospitality sector facing and how can we overcome them?

The first would be the lack of general knowledge, making it hard to sell. Marketing also becomes a challenge. Secondly, there is no specialized hospitality training school, creating a gap when it comes to skilled workers. Uganda has just hired 3 firms (from the UK, U.S and Germany) to Market Uganda. There is also a hospitality school in the making to improve the quality of trained personnel, which will be worth about 12 million USD.

Top Challenges of the Hospitality Industry