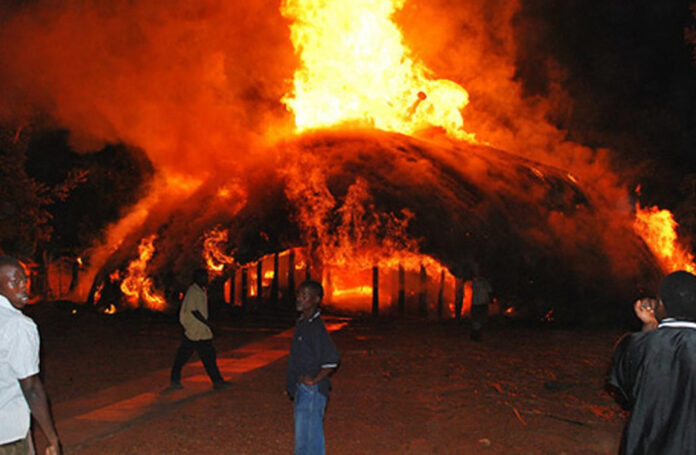 The country including our police are undecided whether to believe Joseph Musoke, the man who showed up at police and claimed onus of the Kasubi fires.

Police spokesperson Judith Nabakooba said Musoke will be subjected to a mental test to ascertain belief that the fellow could be nuts.

Of course as a precaution, one may say police are right to test the fellow. But then, what if the tests turn out to be positive? I am wondering what the police will do after the shrinks declare Musoke mentally unstable.

Are they going to treat him for which ever mental disorder they will have found in him and let him go on his merry way home? Because police reasoning seems to be that the Man’s confession is inadmissible on grounds of mental doubt meaning that with evidence to the effect, Musoke will become another joke in advance for 1st April,fools’ day.

To make my point blank, I believe Musoke could be the Man behind Kasubi’s infamous act, police take him in and charge him.

Take just a minute and think about the kind of person who could have had the guts to burn the tombs. I conclude that the act itself was too mad to be committed by a normal being or hater for that matter.

The fact that the act was mad enough, that qualifies our man Musoke in his obviously unsound state, to be just fitting for the role.
Psychologists will tell you that such people, call them psychos, have done acts reminiscent to the Kasubi affair.

Mostly the reasons for their heinous acts are as bizarre as the acts they commit.For example, let us examine some of Musoke’s reasons.
Musoke, who sources say was a witch doctor turned Catholic, and staunch one at that, claims he got a vision that the ungodliness of the tombs were a source of mischief for the country.

That reason alone is typical of a 1st class psycho! Of course psychos qualify to be termed as nuts, but that doesn’t disqualify them from committing very serious offenses like the Kasubi arson. Most homicides in America are committed by psychos, no doubt you have read stories of a teenager getting a gun and shooting dead class mates, teachers or parents.
You should read a novel called Jack and Jill with an American setting and get a clear picture of what real psychos can do. Though clearly mentally unstable, they can plan and execute a crime quite smartly leaving investigators with a puzzle to fit together, oftenly failing.
Normally, these people expect attention and recognition from authorities as a sign of upping their confidence that after all they are not worthless but persons able of doing some thing that can raffle the mighty.

Mostly, failing to get this attention drives them even madder forcing them to commit more crimes. If not, they decide to give them selves up to police and confess their deeds!
This is what I suspect could have been the case with our man, Joseph Musoke.

Just like the President said in the wake of all sorts of accusations, that it doesn’t make any political sense for any one in his party to mastermind the fires, and surely, you should be a Zombie to disagree with the president on that.

The act of burning the tombs was weird, the reasons behind had to be equally weird and needless to say the person who burnt them must equally be weird. Musoke qualifies for all the three theories.

Dear, Baganda I am a Mubiito in Bunyoro kingdom, I would equally be mad if our own “gasani” at Mparo were to be burnt, but it’s that simple, the person who committed the infamous act may after all be your own Musoke, with no political reason as most people have unfortunately been thinking.

The police are lucky because Musoke’s claims have a lot of history to them, and credible sources to interview. For example, the guards that he alleges restrained him the first time he attempted and then the Katikiro himself, lets pray they cooperate because having not come out to report the attempts in the first place may force them to deny any knowledge of Musoke’s wacky project in a bid to protect their reputation.

However, the challenge is, some sections have already made up their minds on what sort of suspect the investigations must turn up with, hence, many Baganda will continue to look at Musoke as a ploy to put them off target-probably this explains why no Buganda youth have tried to storm whichever police station Musoke is being kept at demanding his head. This is what one would expect from a group that dared the president’s security detail in an attempt to deny him access to the tombs-three died.

Maybe they were set aback by the fact that the claimant is a muganda and a former traditional kiganda doctor and with a kiganda name of Musoke?

I would like to rest my case that, Baganda should come to terms with the occurrence, work with Government to rehabilitate the tombs and forge away forward. The confrontational, radical and arrogant approach will not work.

We have seen that after all, either it was an accident that UNESCO warned about or our own Joseph Musoke. Kenneth Agutamba(Team Leader Youth Action For Development) Hoima.