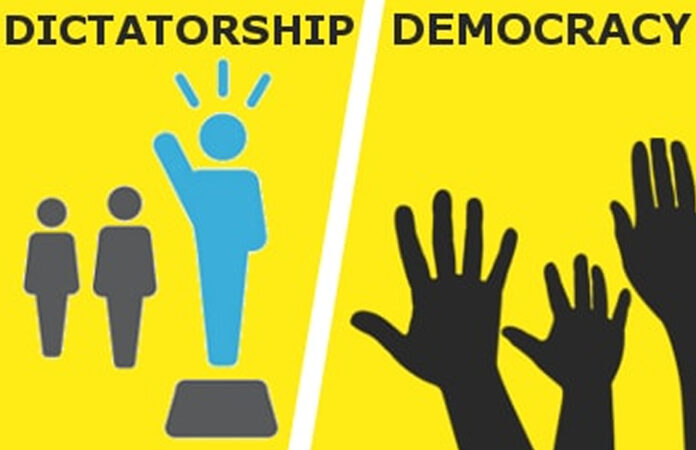 There’s a Wikipedia page about Uganda’s head of state whose intro runs like this, “Yoweri Kaguta Museveni (born c. 1944) has been the military dictator and President of Uganda since 26 January 1986.”

Whether Museveni is a dictator or not is not really my concern but rather to argue that some times, a dictatorship can be more effective than a poorly run democracy.
You will agree with me that some countries under what I may call moderate dictators have registered more progress be it economic, infrastructural and social than us in our so called democratic rule.

Let me ask, would you rather have a democratic state where the people have no jobs, health insurance and full of corruption with impunity or a moderate dictator ship where the president through his wisdom provides for the people in all avenues of public service?
I was in Rwanda for a couple of months working with their ministry of education as a teacher trainer, we can all agree that there’s more democracy in Uganda than Rwanda, but at the same time, Rwanda has better roads, a cleaner city, an excellent law abiding society and a more effective approach to corruption!

This is because; President Paul Kagame is less democratic, using his presidential prerogative to make patriotic decisions that have steered the country forward after a horrendous event in the country’s history.

In Rwanda, a 15 storied house constructed without following the official planning will be surely demolished no matter who its owner is, the result is a well organized, clean and less crowded city. They give you two options, break it or we break it for you! What happens in Uganda under such circumstances?

All the Rwandans I graduated with in 2008 at Uganda Christian Varsity have got themselves very good jobs back in Rwanda and they are living comfortable lives. How long does it take for a youth in Uganda with no influential person in Government to get a good job?

In Rwanda, they say, “You are guilty until proven otherwise”, Uganda has it in reverse order, as a result persons who are publically known to have embezzled billions of global fund, CHOGM and NAADS are out causing inflation in the money market with the money they stole why, because the so called democratic system is taking it’s time to investigate beyond reasonable doubt whether a crime was committed!

Sometimes, Democracy is too expensive and dillydallying for developing countries. If someone has been caught red handed defiling a minor, why do you waste time and tax payers’ money in so called investigations?

For example, I don’t think our members of parliament are worth the cost we squander on them, they say nothing vital, bringing hocus-pocus issues for debate instead of issues that will address needs for employment, poverty and disease.

Very soon, they will be demanding for allowances for making hullabaloo over Bahati’s bill, a bill I think should not have been brought to parliament at all by a presidential order in a moderate dictatorship system.
In Libya, they don’t vote, but government ensures all benefit from the country’s oil wealth by providing housing and jobs.

We have oil in my home district Hoima, but I know it will never benefit me directly!
Back to Rwanda, all nationals are required to pay 1000 francs per year for health insurance (free health care in government hospitals), what happens here when your kid is sick?
You also rarely see a traffic officer on a Rwandan road, but be sure to see a boda-boda cyclist carrying two helmets, one his and the other for the passenger!

Each year, all senior six leavers enroll for a presidential patriotic programme called “itorero lye gyihugu”, whatever happened to ours, God knows.

They also have the “president’s national fitness programme” where people form groups to jog in the morning to cut weight and keep fit not fat! IGP Kayihura says he wants to eliminate potbellies in the force! Wish you success.

As we clear our forests here, all hilltops in Rwanda are full of man grown trees.
Every last Saturday of the month, it’s national general cleaning where businesses close and people clean their environment.

You will also never see a kavera in that country!
However, there’s only one perfect dictator, God, reason why all our dictators and leaders need to listen to advice for being human is to err.