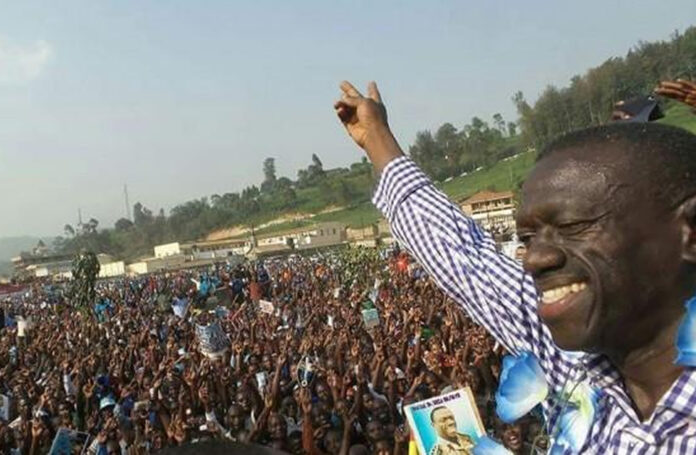 FDC presidential candidate, Dr Kizza Besigye enroute to Kanungu from Kabale district for his campaign rally. Even the bad roads could not stop him.

It is campaign time and the cameras following candidates will visit virtually every village. What the traditional media cameras fail to relay to the public, campaign agents and supporters of candidates will splash on Facebook and Twitter.
Many will have seen Forum for Democratic Change’s Kizza Besigye and Mugisha Muntu go through what thousands, probably millions, of ordinary Ugandans endure every time it rains.
Pressed for time because he had to comb the entire Kanungu District for votes in one day, Thursday November 12, Besigye and his colleagues were forced to participate in clearing the muddy road of trucks stuck in mud for his entourage to pass.

At some point Besigye’s car rendered break down services to a truck; in another instance he was joined by Muntu to physically push a truck stuck in mud.
All this was in Kinkizi West, the constituency represented by former prime minister Amama Mbabazi, who is also a presidential candidate.
We point this out because it is important. Mbabazi was for a long time viewed as a key figure in the government, a government which since the 2007/2008 financial year prioritised roads and invested trillions into the sector.

When Mbabazi was fired as prime minister in September 2014, he was replaced by Ruhakana Rugunda, also from Kigezi sub-region, where Besigye had a torrid time accessing voters.
In addition to Rugunda, there are currently eight more members of Cabinet who hail from the sub-region. These are Henry Banyenzaki, Tress Bucyanayandi, Ssezi Mbaguta, Shem Bageine, David Bahati, Chris Baryomunsi, Philemon Mateke and Jim Muhwezi. The late Aronda Nyakairima, formerly Minister of Internal Affairs, was the tenth member of Cabinet from Kigezi.
In short, Kigezi sub-region is overrepresented in Cabinet – it has 13 per cent of the 80 slots despite having only about 7 per cent of Uganda’s population.

The pictures coming out of the sub-region on Besigye’s campaign trail are an opportunity to exercise the mind. When people from other areas of the country who thought they had less ministers, and therefore were marginalized, see these pictures from a supposedly favoured sub-region, what will they think?
A ruling party member accused Besigye of avoiding the good roads the government has built and using the particularly bad ones with the view of exciting emotions. Well, I would say, it is within his right to want to excite emotions against his political opponents.
That aside, however, did this spokesperson stop to think about the people who live in those areas with impassable roads? How are they supposed to get from one area to another as they fend for themselves?

By the presidential candidates going deep in the villages to canvass for votes with cameras closely monitoring them, the rains seem set to continue to very powerfully push the subject of rural roads down the throats of presidential candidates.
Long live the rains during campaigns, I say, for they appear to have a rare ability to push us to discuss the issue of rural development when the antennas in the country are at their highest.