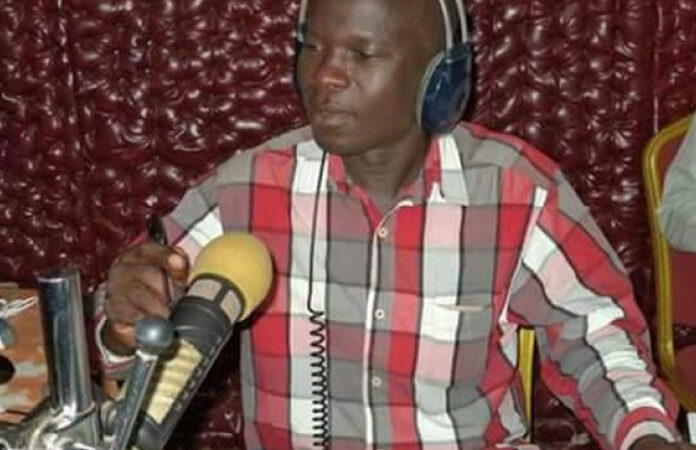 Dixon Godfrey Ssengonzi, the fallen Radio Buddu all round journalist was on Tuesday laid to rest at his ancestral home in Ssanje village Kakuuto Sub County, in Kyotera district.  He was laid to rest on 9th January 09, 2018.

Ssengonzi died of lung infection and skin cancer. He was 50 years. He is described by many as one of the most disciplined professional reporters in the country. Mary Babirye Kabanda, the Masaka district Woman Member of Parliament who intervened to save his life describes Ssengonzi as her friend who loved doing his work “I am a member of Democratic Party but I heard that Ssengonzi supported NRM. I must say that despite the fact that Ssengonzi loved NRM, he was never biased in reporting stories about me as a Democratic Party member,” MP Kabanda notes.

“ I think Ssengonzi died prematurely because we didn’t intervene on time to save his life. He had kept his health conditions secret and by the time we learnt about it, it was too late. I was informed by members of South Buganda Journalists Association Network-SOBUJA that Ssengonzi was too sick but refused to go for serious medication. Matilda Nabukalu, the treasurer of SOBUJA asked me to intervene and save Dicxon life since he respected me and when I went there, I found him in really bad state,” notes MP Kabanda.

Mark Tamale, the General Manager of Radio Buddu described Ssengonzi has irreplaceable.  “ He has been an all round journalist. He was a Luganda news anchor. He also hosted the our Monday to Friday Twezimbe show between 10am and 12noon. Also did the Tumutendereze show on Sunday where he hosted Catholic priests?

Above all, he was also a reporter. That is why I say it will be very hard to find his replacement, “ Tamale remarked.

Tamale added that Ssengonzi who has worked for Buddu for Five years had never asked for his annual leave. “This shows how committed to his work the late has been. In December, his editor came to me and told me Ssengonzi was not feeling well but he continued coming to work. When I saw him, I realized he was very weak. That is why i asked him to take a sick leave,” Tamale explained.

He was also a personal friend of mine who advised me on many issues, “Bindhe added.

Ssengonzi is described by Uganda Media Development Foundation –UMDF as a resourceful person.

Below  is a statement by James Kigozi, the Executive Director UMDF.

“We have learnt with great sadness that our colleague Dickson Sengonzi passed away over the weekend.

Dickson was a very hardworking and resourceful journalist who diligently served his audiences with very informative programs on a variety of topics including; Peace Journalism, Gender equality, Human rights and Agriculture.  We shall greatly miss him.

On behalf of the Board, management and all media partners of Uganda Media Development Foundation, I convey our heartfelt condolences to the management of Radio Buddu, the late Dickson’s family, the media fraternity in Greater Masaka and all your listeners,”

Ssengozi first worked for Masaka-based Radio Equator before quitting to joining Radio Buddu five year ago.  He has mentored many radio presenters who have gone on to become serious radio personalities.