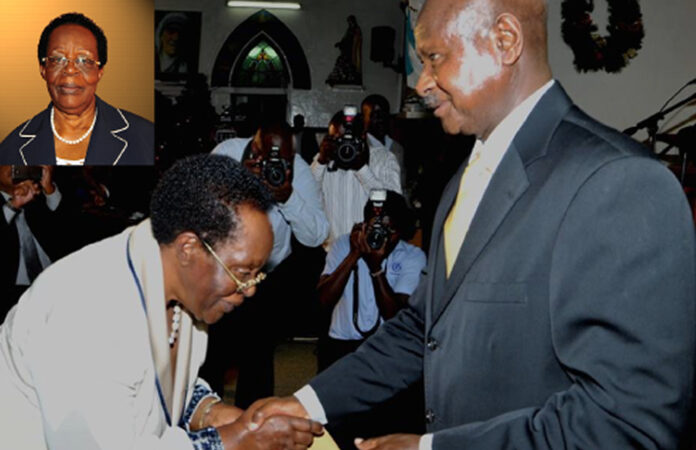 President Yoweri Museveni has hailed Mrs Mrs. Tereza Mbiire for her commitment to hard work and leading an exemplary Christian life which has made her a successful woman.

Mrs Mbiire was celebrating her 80th birthday in a thanksgiving Mass at Christ the King Church in Kampala.

Museveni called on Ugandans to emulate the example of Mrs Mbiire whom he described as a “shining example of people who are developmental and disciplined.”

He explained that she multiplied her talents and through hard work, became wealth and contributed to the development of this country.

Museveni encouraged Ugandans to emulate the Puritan Christians if they want to economically growth as individuals and as a country at large.

He also cited the example of economic success in the United States of America, saying that the Puritan Christians contributed to America’s development by being disciplined and non-alcohol consumers.

Some of the prominent people at the thanksgiving were the Nabaggereka of Buganda, Sylvia Nagginda, Makerere University Chancellor, Professor Mondo Kagonyera, Governor Bank of Uganda Professor Emmanuel Tumusiime-Mutebile and His Eminence Emmanuel Cardinal Wamala who was the celebrant.

Speaking at the mass, Cardinal Wamala challenged the congregation to ask themselves what they have done in their life time for the glory of God and their country as well.

He referred to Mrs Mbiire as a leading woman entrepreneur who has contributed to the growth and development of Uganda.
President Museveni also said Mrs. Mbiire “has been a pillar in Kigezi in opposing sectarian bankruptcy.”

He called on Ugandans to follow the teachings of the Bible which stipulate that the love of God with all one’s hearts should translate into the love of one’s neighbours.