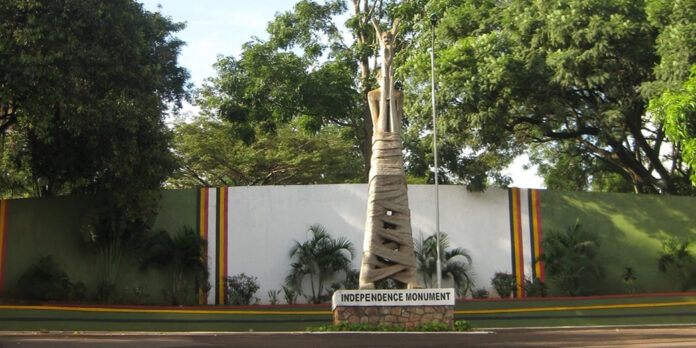 A variety of monuments honoring various events in which Uganda participated can be seen throughout the country. We examine a few of these monuments and provide a brief overview of the circumstances that led to their erection. Like every other country, Uganda has both a happy and a dark past, and monuments honor both. While on a Uganda tour, you can see these ancient structures in Uganda’s most well-known tourist destinations, including a city tour of Kampala.

These well-known monuments were built to honor significant events that took place in Uganda or in which Uganda participated. Because they can be utilized for tourism, education, and memorization, monuments are important. Future generations can be informed about the past through monuments or written history. Some of the Famous Monuments in Uganda include. 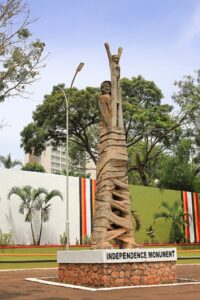 The independence monument, which was erected by the British colonial authority in the early 1960s to mark the moment Uganda gained independence from Britain, is the most significant and one of the oldest monuments built after the Second World War.

The organization that controls Kampala city, Kampala capital city authority, is in charge of managing and maintaining this monument. Both domestic and foreign tourists can visit throughout the day and at night.

Located along Speke Road, next to the Kampala Sheraton hotel grounds, in the center of Kampala. Numerous Kampala residents have visited this monument due to its cleanliness and attractiveness, as well as vendors and people who are taking pictures of it.

This monument is celebrated annually on October 9 to remember the day that India gained its independence. The memorial shows a woman unwrapping a child, symbolizing the birth of a nation that is no longer subject to colonial rule. Gregory Maloba created and proposed this memorial. 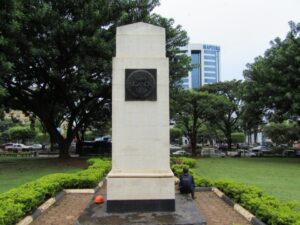 The World War Monument is the oldest statue in the nation. It was erected in 1945 by the British colonial authority to remember Ugandans who died while fighting for the British government during World War II. The colonial masters requested assistance from their territories during World War I in order to bolster their forces and defeat the adversary. Uganda received a request from its colonial overlord to send troops to aid its master. Britain provided the funding for the construction of this monument to honor Ugandans who fought for them at the close of World War II in 1945. It is situated in City Square, next to Kampala’s main police station.

The back of the five thousand shilling note (5000) features a printout of this World War I memorial. 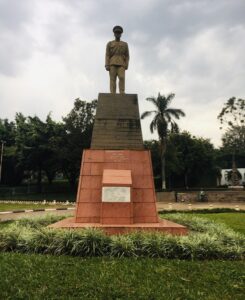 The Mutesa 1 organization proposed the Sir Edward Mutesa Monument to honor Sir Edward Mutesa Fredrick William David Walugembe Luwangula 1, the 35th king of Buganda and the first president of Uganda. After independence, Sir Edward Mutesa I served as Uganda’s first president. After the attack on Kabaka’s palace, he was deposed by Dr. Milton Obote, his prime minister, and sent into exile in the UK, where he eventually passed away. He is portrayed as a combatant in military garb holding a sword in the statue. He was one of the leaders of the nation’s independence movement. 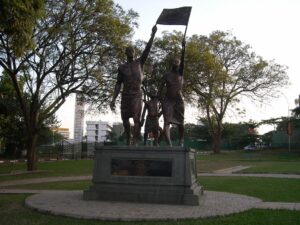 One of the most expensive monuments in the nation is the Stride Monument, which cost Uganda 150 million Ugandan Shillings to erect in honor of the 2017 CHOGM event. In the heart of Kampala, this monument is situated between the parliamentary structure and the Hotel Serena. A father, mother, and son are assembled in this work of art to represent the unity of the countries that make up the Commonwealth. Ugandans created and the Ugandan government paid for this monument.

Schools, universities, and colleges that are well-known for their education have intriguing and eye-catching buildings that illustrate the essence of their motto and vision. These monuments serve more than just educational and memorial functions; they also draw tourists who prefer to learn about the people and events that have shaped our world.

The two oldest universities in Uganda are Makerere and Kyambogo, with Makerere University being the oldest in all of east Africa with more than a century of existence. These institutions house some incredibly beautiful and interesting educational monuments.

Kyambogo University’s monuments were constructed by the school’s art teachers. Three kids are stumbling to open a book created to celebrate the country’s 100th anniversary of education. In 1996, Kintu Musoke announced its introduction and launched.

The centenary park of Kampala is nearby the Africana Hotel on Jinja Road. This statue was created to honor Kampala City’s centennial festivities. It was created by a lecturer at Makerere University with funding provided by Kampala Capital City Authority (KCCA), Kampala’s governing authority. 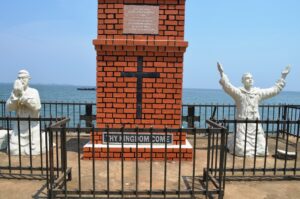 On the banks of Lake Victoria in Entebbe, the monument is situated at the Kigungu landing location. The monument features two Catholic priests who were members of the white fathers’ group that arrived in America in 1879. Ugandan Catholics place a high value on Brother Amans Mapeera and Reverend Father Simon Lourdel, and they travel there on February 17 every year to honor their lives and the beginning of Christianity.

The Republic of Uganda still places a great deal of value on other monuments, but those listed above are the most urgent. The natural and physical history of Uganda is greatly influenced by these monuments, which recount noteworthy incidents.

While on an adventure tour in Uganda, one can see these iconic landmarks, some of which are situated in Kampala city and others on the outskirts. Both domestic and foreign tourists have access to these monuments at any time. Our driving guides will walk you through the origins, tales, and other information you may find on various memorial monument locations throughout the country.

What to Know About an All-inclusive Uganda Safari Tour